HOME
Contact Us | About Us
You are here: Home » HF Managers » Institutional Flows Power Growth for Claren Road, MKP Capital and BlueCrest in Credit

In all investment strategies of the hedge fund industry the big have got bigger. The growth of assets has tended to be dominated by the top managers, whether in CTAs, macro or multi-strategy. In the period since the Credit Crunch of 2008-9 this long-term trend has accelerated. 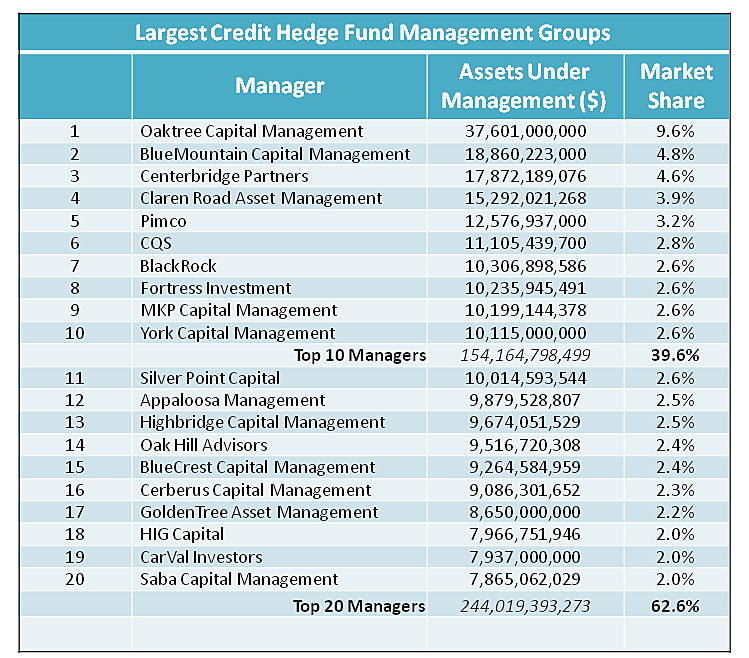 Although a small majority of the Top 20 firms have been in existence for over 20 years, it is striking that some of the largest managers in (alternative) credit have got to that scale in less than ten years.

Three of the Top 20 firms amongst credit hedge funds, Centerbridge Partners, Claren Road Asset Management and Saba Capital Management, fall into this massively-successful-in-a-decade category. Outside the Top 20 managers, Brigade Capital was founded in 2006 and David Warren’s DW Investment Management was carved out of Brevan Howard in 2009. 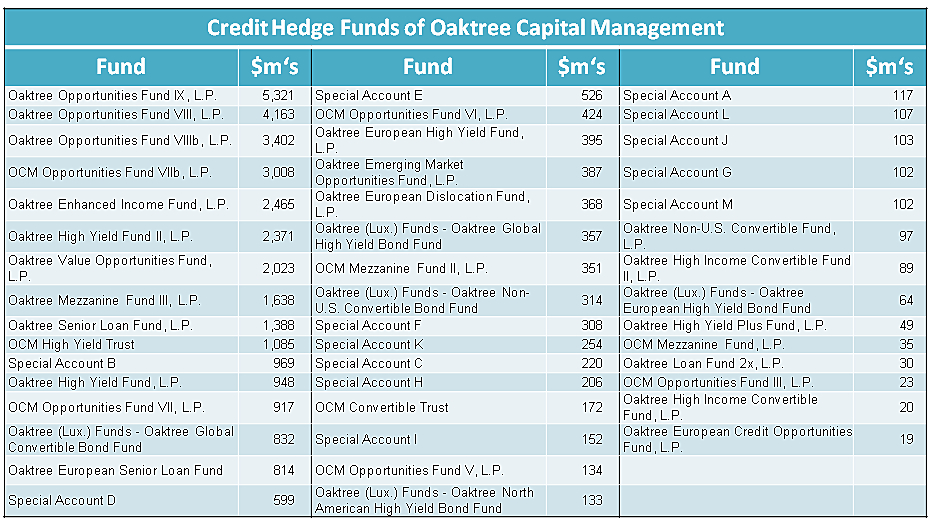 The rest of the Top20 managers do not run as many individual funds as Oaktree Capital. But then Oaktree has been a dedicated credit manager for longer than most of the other management firms, and diversified earlier than most. Oaktree Capital has a history of tactical launches for funds, thereby attempting to time launches to the potential advantage of clients. Consequently Oaktree has more funds with narrower investment remits when compared to other credit hedge fund groups.

Tables 3 and 4 show the fund ranges of BlueMountain Capital Management* and Centerbridge Partners as a contrast to the extensive range of Oaktree. Both the second and third largest credit hedge fund management groups have fund ranges in which the assets are concentrated in a few funds. Creditflux data shows that the fastest growing credit hedge fund management groups amongst the Top20 contains at least one surprise. It will expected by regular readers of Hedge Fund Insight that MKP Capital Management and Claren Road Asset Management make Table 5 of the fastest growing credit hedge fund groups. Both firms have been noted here previously for their success in winning institutional mandates. The surprise in Table 5 is the presence of BlueCrest Capital Management. BlueCrest started out in business managing fixed income relative value and macro strategies, but has become strongly associated with its large trend-following managed futures business BlueTrend. BlueCrest have had several unsuccessful attempts to grow equity businesses, but has succeeded over recent years in growing its credit hedge funds fivefold to a mid-year level of $9.3bn.

Beyond the Top20 names there are a number of bond management firms that have achieved notable growth in credit hedge funds in the last few years. Muzinich & Co has two credit hedge funds – the Muzinich LongShort Credit Yield Fund** and the Muzinich CreditHedge Master Fund, both launched in the Spring/Summer of 2012. The Muzinich LongShort Credit Yield Fund currently has over a billion dollars in it, and the CreditHedge Master Fund has $126m in AUM.

Alcentra has credit funds in a number of strategies – structured credit, special opportunities, direct lending and European-focused credit funds- but the largest strategy for Alcentra is mezzanine funds. Alcentra assets under management in funds are up six-fold in a few years.

Two further firms deserve mention for their sector-leading recent growth. Canyon Partners’ distressed and structured credit funds have tripled in assets over recent years. The final mention goes to Acuity Capital Management of Greenwich CT. The Acuity Corporate Opportunity Fund has had consistent returns since it was launched in July of 2010. The return profile (absolute returns and volatility) has attracted a good level of assets from a low base. The fund is now up to $238m in assets .

All data sourced from Creditflux, E&OE.

One Response to “Institutional Flows Power Growth for Claren Road, MKP Capital and BlueCrest in Credit”