HOME
Contact Us | About Us
You are here: Home » Investors » Hedge Funds Losing Relative Appeal to Family Offices According to Survey

2018 marks the fifth year of the annual Global Family Office Report from Camden Wealth, this time produced in association with UBS. The report reflects a record number of 311 family offices from around the world participating in the research this year. Aligned with the rise in participants, the value of the data and insights for benchmarking and planning purposes increases markedly.

There has been a notable jump in the number of new family offices being established after the millennium, one-third of all family offices responding now have secondary branches, successfully expanding their global footprint. Half of family offices report that their assets under management (AUM) have increased over the year, while three-quarters remarked that the wealth of the families they serve has been on the rise. But, what is probably the most remarkable point to highlight this year, is the fact that family offices’ total average investment portfolio return reached 15.5% in 2017. This is up from 7.0% in 2016 and a complete revival from 0.3% in 2015. It is in this context that this extract looks at Family office investment in hedge funds.

Hedge funds remained in lower demand through 2018, driven by their under-performance stemming from the low volatility regime in recent years. This has seen private equity and equities investments outperform hedge funds and maintain their higher allocations in family office portfolios. Allocations to hedge funds have been falling since at least 2015, with this year being witness to a 3.2 percentage point decline. Hedge funds now again account for just 5.7% of the average family office portfolio. The less-than-desirable returns of hedge funds over the past several years have discouraged investors from allocating a greater proportion of wealth to this asset class.

Taking a closer look, long/ short strategies account for the highest proportion of hedge fund investments, followed by global macro, credit and event-driven. Family offices in North America are the most likely to take a long/ short (equity) or event-driven approach, whereas those in Europe tend to favour global macro or relative value arbitrage positions. 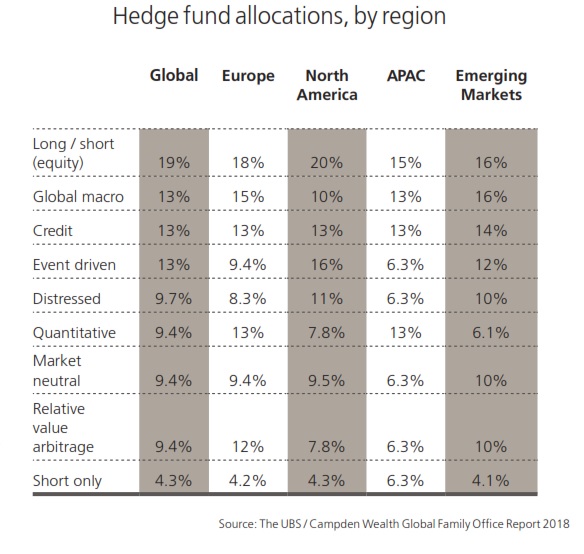 One CIO from a single family office in North America expressed his opinions about the disadvantages of hedge funds:

‘Intrinsically, we don’t like hedge funds. But we have some exposure where we think we are particularly clever. However,  I think hedge funds are expensive. I think they’re illiquid. I think they’re lacking in transparency. It’s funny, in the long equity world, fees have come down quite significantly over a period. Hedge funds have come down a bit, but they’re still kicking and shouting about the fees. And if you’re making 20%, I’m quite happy for you to have a lovely big fee. But I know most of the hedge funds haven’t been making 20% – and frankly I’m not that happy with the fees that are paid and everything else.’

From the table below it can be seen that expectations from family offices of returns for hedge funds have declined over the last five years. But the return versus expectations is also a factor in investor perception of the asset class. Why keep the allocations when returns have not met even lowered expectations? 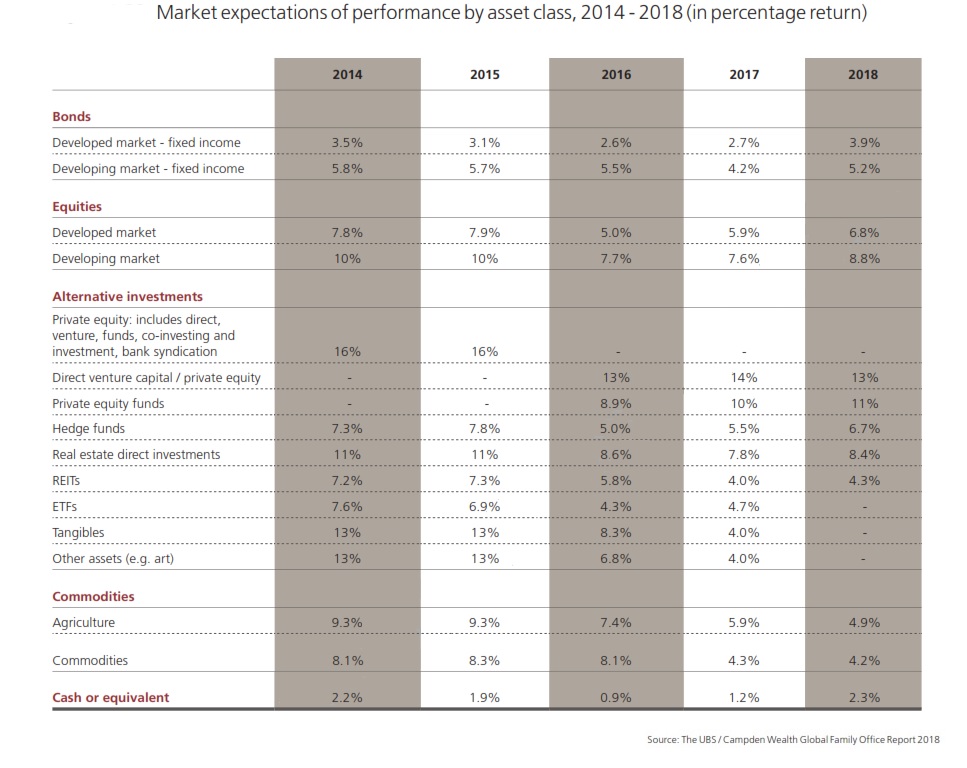 The reasons beyond returns for investing in hedge funds were enquired of in the survey, and are shown in the graphic below. It is noteworthy that by inference family offices at this point see hedge funds as offering reasonable  liquidity, cost and diversification.

Motivations to invest in hedge funds, beyond returns 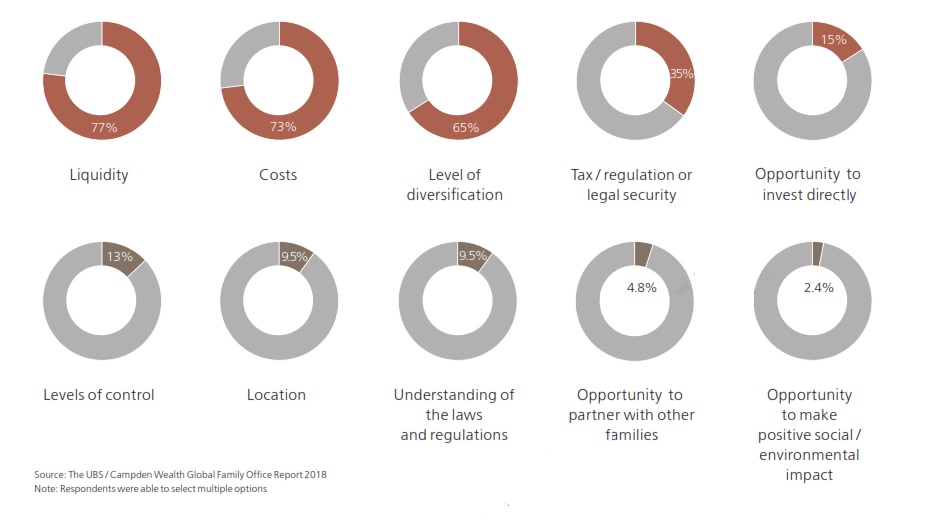 ‘If you look at hedge funds over the last five to eight years, they offer much lower returns than the rest of the market. The purpose of a hedge fund is to limit your downside risk, but you’re not going to get the upside as well.’

Family offices leveraged their hedge fund holdings less than other asset classes (graphic below) this year. 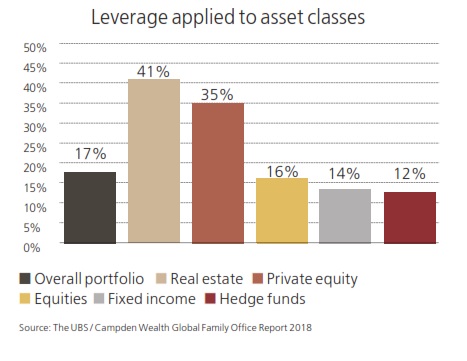 Leverage applied should be a function of the distribution of returns as well as the availability of lending capacity at an economic price. Downside risk, the size and frequency of losses, has to be a consideration as well as the size and repetition of gains. In this regard the transparency of hedge funds versus other asset classes does not help. Real estate and private equity are not as readily, frequently or accurately marked-to-market as hedge funds, so psychologically they are easier to leverage.

With three months to go in the year, it is unlikely that hedge funds will produce double-digit or even high single-digit returns this year (HFRI was up 1.32% at the end of July). However expectations of family office investors in hedge funds are now much lower than previously, to the extent that it is now feasible that the erosion of capital allocations to hedge funds will pause in 2018/19.