HOME
Contact Us | About Us
You are here: Home » Investors » Insurer Argo Group Mirrors Industry In Capital Allocations to Hedge Funds

(NYSE: ARGO), the Bermuda domiciled property/casualty insurer, produced results last week, giving an opportunity for observers to look at its’ hedge fund holdings. Argo Group has invested in hedge funds for more than seven years within an allocation to “Alternatives”. The portfolio context is given below: 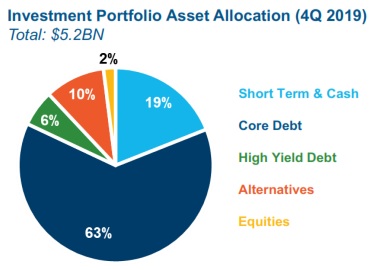 On the investment side, Argo Group runs specific material risk concentration limits that are subject to enforcement. The maximum allocation to hedge funds, private equity or directly managed assets is limited to 15% of GAAP equity. Equity was reported for the end of the 3Q as $1.86bn. That is, the latest risk limit was $279.6m for each asset type. The largest allocation to hedge funds has been $180m in 2016, up from $150m in 2014 and $85m in 2013. So Argo’s hedge fund allocations have not come near their own risk limits, and peaked four years ago.

Looking at the quarterly capital committed to hedge funds in the table below it is easy to interpret that there were two redemptions of $20m or so from hedge funds in 2018, and one of $20m in 2019.

Interpretation of the asset flows for the first three-quarters of this year is much more difficult for several reasons, one of which is that in 2020 there has been the widest dispersion of returns of hedge funds in five years.

Argo Group invests in four hedge fund strategies: long/short equity, multi-strategy credit, relative value credit and distressed credit. The second difficulty in inferring whether there have been further redemptions from hedge fund allocations by Argo Group in 2020 is that at the strategy level distressed credit and L/S equity were down on the year-to-date. Large multi-strategy funds were down on the year, but relative value strategies and fixed income strategies produced small positive returns. In sum, it is difficult to judge whether Argo actively reduced hedge fund exposures through redemptions or suffered from adverse strategy and manger selection this year.

The liquidation of portions of the holdings in the investments of Argo Group was not confined to hedge funds, and was carried out to enhance the underwriting capability of the 72-year-old insurer. The rationale was explained by Jay S. Bullock, Executive Vice President and Chief Financial Officer during the 2Q earnings conference call this year.

“Alternatives generate income. Back of the envelope math shows that a $3 million to $6 million per quarter out of that portfolio was not unreasonable….Late last year, we made the decision to de-risk the portfolio. This has accelerated some of the income pressure, but it’s also freed up some additional capital to deploy into our underwriting operations.

“In the fourth quarter of last year, we were looking at the environment and thinking, well, this is a great underwriting environment, and we really want to put our efforts toward the U.S. specialty business. And one way to have more capital to do that was to take some of the risk out of the investment portfolio, which consumes (regulatory) capital. So we sold almost $300 million out of the equity portfolio and held that in cash through the beginning of the year.”

Over the course of 2019 Argo Group cut its’ hedge fund exposure by 9.3%. Over  the same year the property/casualty segment of the industry made a year-over-year reduction of 22% in hedge fund exposure, the largest among the major industry segments (the others being life/annuity and health). In aggregate the U.S. insurance industry reduced its hedge fund investments to switch some of the capital to private equity.

A.M Best report that many insurers say they are not getting the returns from hedge funds needed for the fees and capital requirements costing them in the current environment.