HOME
Contact Us | About Us
You are here: Home » Investors » Long/Short Equity Outlook Improving On Correlation and Dispersion Changes

By Juliana Hadas and Andrea Pompili of Neuberger Berman

The beginning of this decade was a challenging time for long/short hedge fund performance, with the overall universe having generated negative Jensen’s alpha (risk-adjusted excess returns)—see Figure 1. However, alpha has been rebounding starting with the second half of 2012—a trend we believe will continue. In our view, much of the underperformance in the earlier period and the subsequent rebound can be attributed to two major challenges experienced by the broader equity markets in this time frame.

The period between the global financial crisis of 2008 and the second half of 2012 was characterized by abnormally high correlations between stocks. Stock movements were driven more by macroeconomic developments and overall market sentiment and less by individual company fundamentals. Such an environment creates headwinds for funds that focus primarily on security selection, which is the case for most long/short hedge funds. Figure 1 shows the impact that inter-stock correlations have historically had on hedge fund alpha. It shows the rolling one-year Jensen’s alpha of the HFR Equity Hedge Index over both the Russell 3000 and the MSCI ACWI Indices and compares it to average rolling one-year stock pairwise correlations over time. (Data for the Credit Suisse Index looks quite similar.) The alpha has had an inverse relationship with the pairwise correlations, declining when correlations increased and increasing when correlations declined. As inter-stock correlations have started to trend down since mid-2012, hedge fund alpha has started trending back up. 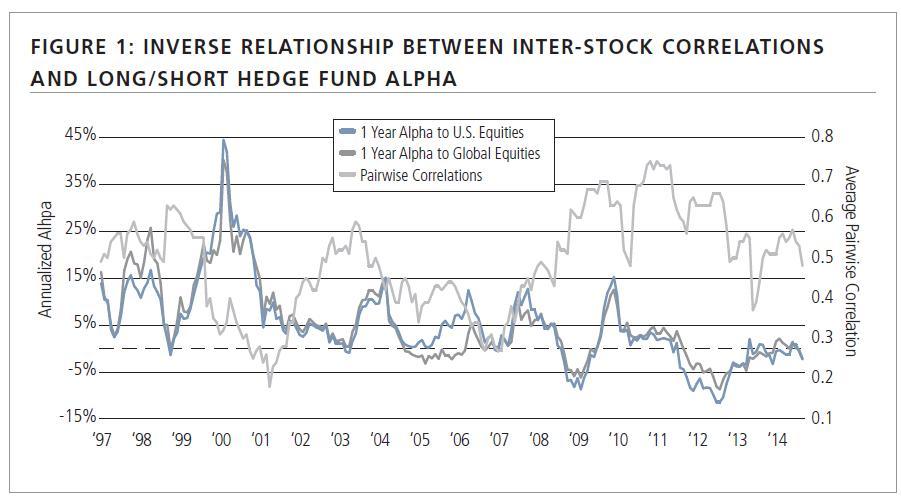 Source: HFR, MSCI, Russell, data through September 2014. One-year rolling alpha of the HFR Equity Hedge Index to the Russell 3000 and MSCI ACWI Indices for U.S. and global equities, respectively. Pairwise correlations data is the average correlation of the monthly returns of the 100 largest stocks currently in the S&P 500 Index to the monthly return of the S&P 500 Index, over the course of one year. Past performance is not indicative of future results.

Higher interest rates increase a business’s cost of capital, leading to increased differentiation in the performance of companies with different capital structures. With higher rates come higher interest expenses, and a company with relatively thin operating margins and too much leverage may find its debt burdens providing significant headwinds in such an environment. On the other hand, a company with less debt and higher operating margins will likely fare better in such an environment. Historically, there has been a positive correlation between intermediate-term interest rates (a key component of corporate capital costs) and the amount of valuation dispersion (based on companies’ price-to-earnings multiples) in the market.1 There has also been a positive correlation between valuation dispersion in the market and hedge fund Jensen’s alpha (see Figure 2). 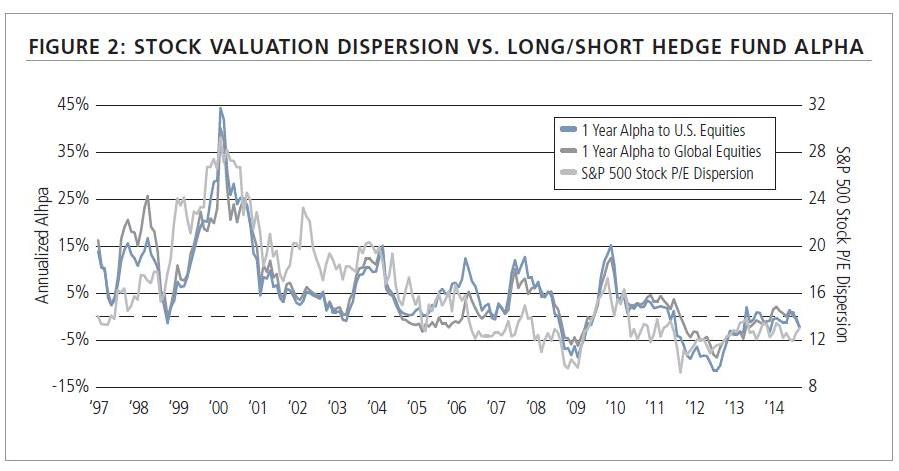 Source: HFR, MSCI, Russell, Bloomberg, monthly data through September 2014. One-year rolling alpha of the HFR Equity Hedge Index to the Russell 3000 and MSCI ACWI Indices for U.S. and global equities, respectively. Stock dispersion data is the difference between the 80th percentile and 20th percentile price-to-earnings ratio of the stocks in the S&P 500 Index. Past performance is not indicative of future results.

Once interest rates begin to rise and approach historical norms, we believe that valuation dispersion should also increase, leading to an environment in which fundamental stock pickers with more effective security selection can be better rewarded.

Another challenge of near-zero interest rates has been their impact on the short rebate, the interest a fund receives on cash proceeds from its short sales, less the various transaction costs and borrowing fees associated with the mechanics of shorting. Typically these proceeds are held in an interest-bearing money market account. In the current environment of near-zero interest rates, the short rebate does not amount to much (and may in fact be negative, as transaction costs may outweigh the interest), but in a more normalized (e.g., pre-crisis) interest rate environment, the short rebate has added as much as 150 – 200 basis points of performance for managers with substantial short exposure.2

In our view, manager skill is critical in a successful long/short investment program. Alpha can be either positive or negative, and the fewer constraints on investing, the larger is its potential magnitude (on the upside or downside). In fact, dispersion among individual manager returns is substantial in hedge funds. 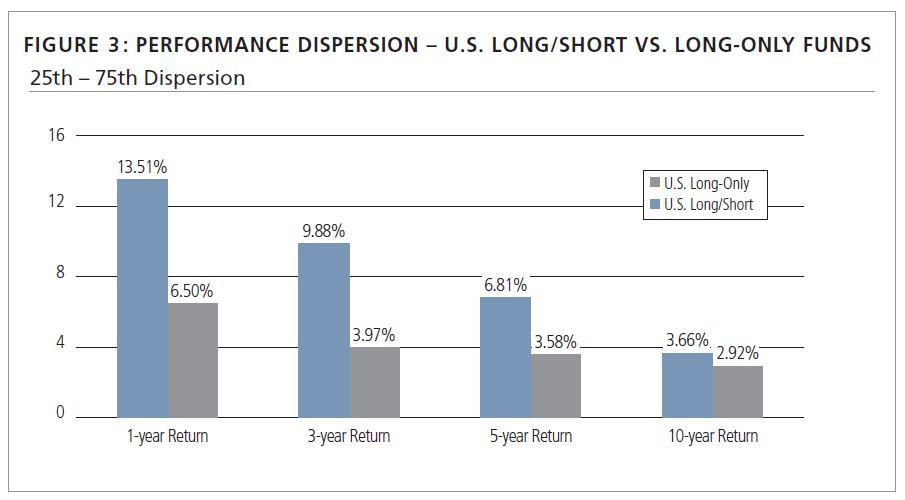 Return and risk profiles also differ by funds’ gross exposure levels and shorting strategies. Holding net exposure constant, a fund with larger gross exposure is running a more active portfolio than a fund with smaller gross exposure. Therefore, the former fund would have more capacity to generate alpha (positive or negative) and can also have higher drawdowns and/or volatility. Similarly, funds that engage in fundamental shorting of individual securities have the potential for extra alpha generation (again, positive or negative) relative to funds that engage only in overall market shorting that acts solely as a beta hedge to its long positions.

This article is an extract from the Neuberger Berman White Paper “The Case for Long/Short Equity: Four Reasons to Include the Strategy in a Portfolio” published November 6th 2014.

1 Based on observing the direction of valuation dispersion as illustrated in Figure 9 and the path of intermediate-term interest rates, proxied by the Barclays U.S. Treasury Intermediate Index (maturities between 1 – 10 years).
2 Source: NB Alternatives, 2014 Hedge Fund Strategy Outlook, pages 6 – 7.