HOME
Contact Us | About Us
You are here: Home » Regulation » AIFM, or the Dissolution of Hedge Funds in Europe

“The fort is betrayed, even of them that should have defended it. And therefore seeing the matter is thus begun, and so faintly resisted on our parts, I fear that we be not the men that shall see the end of the misery.” Saint John Fisher, d.1535

The European Council published the final text of the Alternative Investment Fund Managers Directive (AIFM) on 13th May 2011[1]. According to Deloitte, AIFM must be implemented by national legislations before 22nd July 2013 and AIFMs must submit an application to their competent regulatory authority by 22nd July 2014[2]. If you derive all or part of your income from alternative investments, i.e. hedge funds, private equity and venture capital, then prepare yourself for a significant drop in your standard of living; assuming you keep your place. If you’re not anxious about the impact of AIFM on you, then you are either already living in Switzerland with several years’ performance fees banked in francs and gold, or you’re in London and have swallowed whole the propaganda that UK membership of the European Union is a peripheral issue of interest only to fruitcakes[3].

I read the AIFM draft in April 2009 and I read a report called “Impact of the proposed AIFM Directive across Europe” [4] produced by Charles River Associates in October 2009 at the FSA’s behest; I read the AIFM final text of May 2011; and I read the AIMA note of April 2012, “Analysis of divergences between the EU Commission’s draft regulation implementing the AIFMD and the ESMA advice”[5]. In addition, I have attended several conferences since 2009 where expert panels of lawyers, regulators and compliance officers discussed the pros and cons of AIFM – the only pro being the make-work scheme AIFM represents to the aforementioned troika of overhead. It is needless to critique either the Directive or critiques of it. It is only necessary to say that all the unintended consequences of this Directive have the same provenance as those of l’euro. Never once, at an industry event, or in the scant media coverage of AIFM, has anyone rejected it in toto on the basis that it lacks legitimacy.

The motivation behind AIFM is its ability to achieve two of the European Commission’s motivating objectives in one fell swoop, i.e.

i)      to exact rent from another industry through regulatory capture, and

ii)     to reduce the size and influence of the Anglo-Saxon buccaneers who seek economic outcomes that conflict with the   acquis communitaire.

The ability of the City, but hedge funds particularly, to make millionaires at random, without the proper patronage, has aggravated the Commission for 20 years. The banking crisis is merely the crisis that is too good to waste and so here we are, like monks in 1535 vaguely aware that something is scheduled for next year, but hardly suspecting that it will be the end of an era. Below is a chart of how Britain’s fishing industry was dealt with after the introduction of the Common Fisheries Policy. The trajectory of fishermen is the same as every other industry that has been subjected to “harmonisation” by the Internal Market Commissioner of the day. Whichever empty suit occupies the benefice, he has the same attitude to hedge funds as Tony Crossland infamously had towards grammar schools. 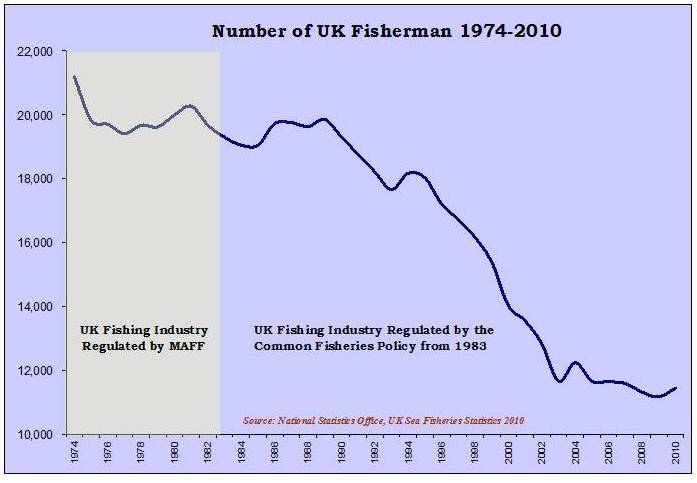 The European Union, like Bluff King Hal’s court, is always short of money – egos that big are not cheap to feed. It’s not surprising then, that they looked about for the undeserving rich and catching the spirit of their respective times, would expropriate the wealth of the anathematised – the European Commission holds the same opinion of markets as Luther held about chanting for souls in purgatory. The collectivist EU is doing what it has always done, planning to fail; the question is, why have our fidei defensores stood mute while they wreck Britain’s economy?

Finance is an important industry for Britain – it pays well, and absorbs many intelligent graduates who would otherwise make nuisances of themselves promoting utopian schemes at public cost. Yet, AIFM is going to reduce significantly the amount of wealth generated by UK-based hedge funds and let’s face it, the skills learned in financial services are not readily transferable to the real economy. Plus the only other jobs that pay as well as finance are in the upper echelons of the public sector, and if we had the contacts for one of those, we wouldn’t have had to speculate for a living in the first place – we’d already be in our sinecures.

Consequent upon the Dissolution, some monks got pensions and wives and some got burned at the stake. The connected got the former and the dogmatic the latter. What is to become of the UK’s hedge fund industry after the AIFM-inspired Dissolution? The industry is already reeling under the triple blow of an on-going systemic crisis, blotted escutcheons in 2008/9 and failure to recover high water marks since. AIFM is not the end of a process, it is the installation of a ratchet that will initially take out the small hedge funds, where supposedly all the bad practices are (just like the small monasteries were first to go), but eventually even the mega-hedge funds will be obliged to alter their operations.

What can be done to help the industry? Nothing, while hedge fund principals court “friendly” politicians, and salarymen are complicit in their own expropriation. To register a protest, do not vote for the parties that have embraced the EU – that means the “big three”. What does it matter that Conservatives talk tough on the EU but the leadership advances its cause? The result to a hedge fund salaryman will be the same as if they had taken the Liberal Democrats’ honest, but insane, policy of ever closer union. It may be too late to undo the damage, it may even be academic if the banking system can’t recover from the euro’s demise, but the industry should be able to use its financial heft to change the minds of those who matter, by hitting them in the collection box.

One Response to “AIFM, or the Dissolution of Hedge Funds in Europe”