HOME
Contact Us | About Us
You are here: Home » HF Managers » Some Dangerous Signals Appear in Financial Markets

We held our quarterly investment meeting last week (please let us know if you would like to receive a copy of the chart pack), and as you would expect, in both preparing for the meeting and in discussion during the meeting, we thrashed out a number of issues and potential scenarios. In short, we believe that the best scenario for equities is more of the same seen in the last year or so, i.e. roughly sideways with intermittent bouts of volatility.

The chart below depicts what we envisage as the best case scenario. The MSCI World (Net Total Return) Index has been thrashing around with no gain for over 18 months now. During this period, global economic growth has disappointed, central banks have been encouraging gross speculation with continuous unconventional monetary easing and fewer assets/stocks have actually risen in value. 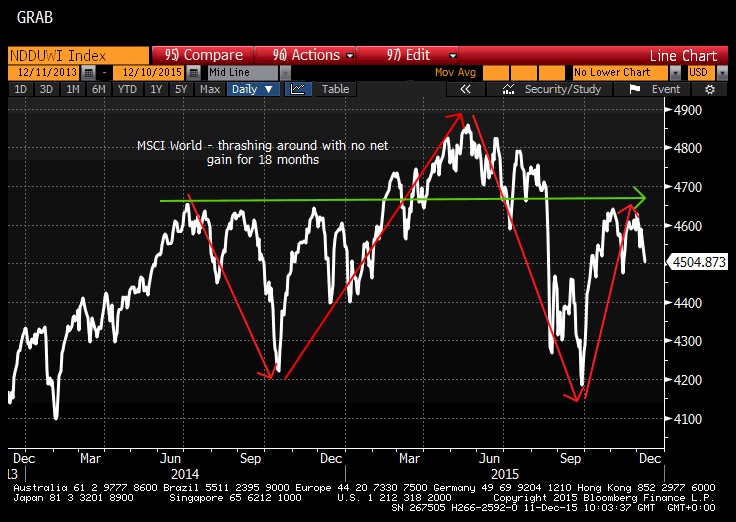 What is our worst case scenario? A large bear market with the dramatic declines seen this August providing a foretaste of what is to come. We will share some thoughts on some recent developments, but first, some context.

John Mauldin’s work is a must read every week. In his “Outside The Box” this week, he provided two research pieces written by Charles Gave of Gavekal. We have not had the pleasure of meeting Mr Gave, but what he wrote certainly resonated with us.

Charles Gave points out “History has thrown up multiple attempts to create wealth by printing money from the Song dynasty to renaissance era Italian bankers, through revolutionaries in France and their Assignat notes, to the more recent case of Zimbabwe.” Mr Gave goes on to consider in more detail the “Mississippi Bubble” during which a previously bankrupt France (because of the previous wars during the reign of Louis XIV) witnessed a huge increased in asset prices due to money printing. The Mississippi Bubble eventually burst and investors lost vast fortunes.

The point being that printing money simply does not create wealth. Instead, and for a short period of time (three years in the case of the Mississippi Bubble), there is a wealth illusion as asset prices rise. Ultimately, the illusion will crack and investors will try and sell their inflated assets. Initially, they may want to sell on a rally, then they will try and sell at market. However, as it becomes obvious that the bubble has burst, they will sell to anyone at any price, no matter how low the bid is. By this time, investors are way past the moment of wealth preservation, and are now in the realms of trying to salvage any remaining wealth they may have (the return of capital not the return on capital).

As an example of this dynamic, it was announced last week that a well know junk bond fund managed by Third Avenue in the United States was going to close. Having held assets of US$2.4 billion, the fund had lost over 25% of its value and suffered US$1 billion of redemptions this year. Our suspicion is that the fund sold the more liquid assets it held to meet these redemptions. So far in December, the fund has suffered a further US$120 million in redemptions that it is struggling to meet. Management has decided to close the fund and liquidate the assets in an “orderly manner”.

Having sold the more liquid assets already, there may only be illiquid stuff left, hence the fund manager’s decision to close the whole fund. The fear is that the price that someone is willing to buy these assets at is some way below the last traded price. This would hurt not only the remaining investors in the fund closing, but also all holders of those assets. Furthermore, there is a risk of contagion developing across the junk bond market, possibly seeping into the wider corporate bond market.

Trading and investing can be an emotional business, by which we mean that at the margin, people are driven by fear and greed. As prices go down, and investors begin to lose money, the fear of losing more money can become a strong emotion. There is, however, one circumstance that can be worse than the fear of losing money, and that is the fear of not even getting your money back. So, although Junk bonds are suffering their worst year since the crisis and investors are beginning to worry about losing money, when a fund suspends redemptions as happened this week (and it may prove more difficult to wind up the fund than the manager hopes), investors fear about getting any remaining money back. 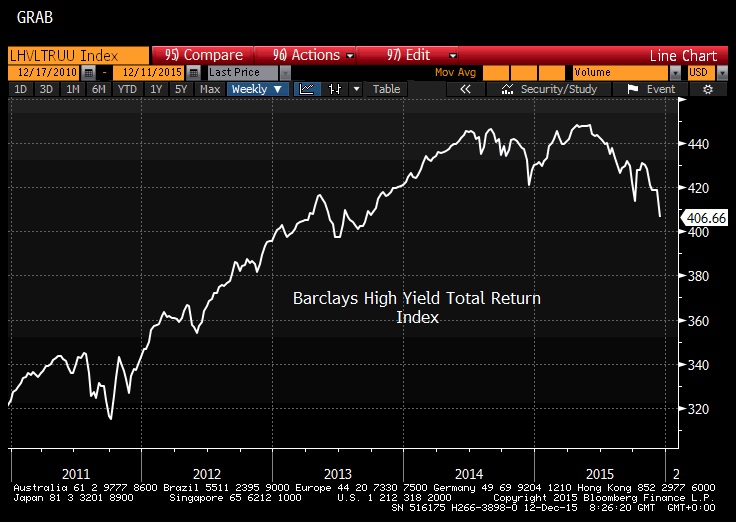 Having been told that they cannot have their money back immediately, will investors in the Third Avenue fund try and sell other junk bond funds they hold? Perhaps, and this may well cause a surge in selling across the junk bond market which will be difficult to absorb given how illiquid that market is today. It is possible that selling in the junk bond market may lead to selling in higher quality corporate bonds as investors try and raise cash within their portfolios.

Generally speaking, corporate news flow continued to deteriorate this week. News of ratings downgrades by S&P and Moodys and announced dividend cuts will continue to chip away at investor sentiment, and are of course indicative of deteriorating cash flow and balance sheets. In the US, corporate earnings have declined year on year for two consecutive quarters and are forecast to do so again in Q4.

It strikes us that at the margin, the focus is shifting away from rewarding shareholders and more towards rewarding bond holders. If this is indeed occurring, coupled with less demand from investors for new corporate bonds, then companies will struggle to find the cash to fund share buy backs. With companies themselves being the only major source of buying in the equity market, if they have to step back because they cannot find the cash to keep buying, then the equity market will be vulnerable to marked declines.

Last week, as has been widely reported, OPEC failed to agree on any sort of orderly production quota. The price of oil has since fallen by over 13% in just six trading days. We know that, despite helping consumers over the longer term, lower oil prices hurt producers. Mainly, this can be seen as Emerging Market countries and the US shale sector. This has significant consequences for capex in the US and also highly paid jobs in the energy sector.

The biggest fear is that Emerging Markets, such as Saudi Arabia, will dump FX reserves to plug the gaping hole in their budget finances. This selling will increase real yields in the US in the short term, but in the longer term, these guys may need to devalue their currencies. The pressure on these countries is only intensifying, and any change in currency values will only make the Dollar stronger.

In fact, it is not only commodity sensitive Emerging Markets that remain under pressure. The 800 pound gorilla that is China seems to be actively allowing the Yuan to weaken. With the offshore Yuan rate now at its weakest since the mini devaluation in August, and the pace of declines accelerating, China is fully on course to export its enormously destructive deflationary forces to Developed Economies. 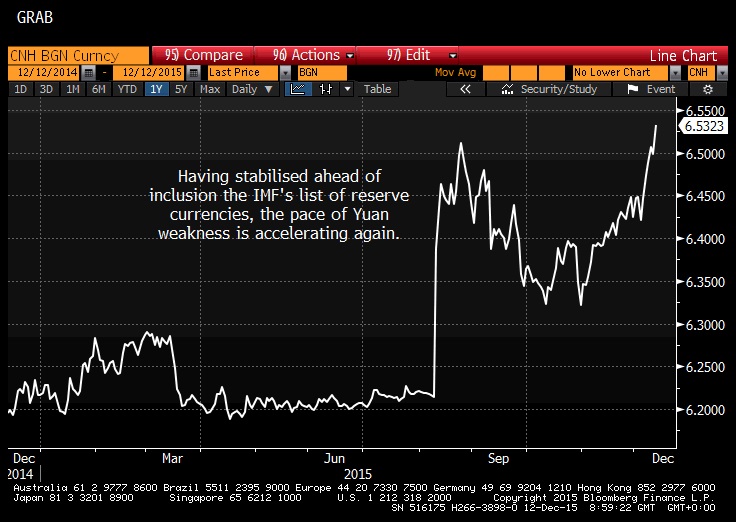 So, what does this all mean for equity markets? We have thought for some time that equities were vulnerable to a vicious bear market. To Charles Gave’s point, printing money does not create wealth. We believe that the poor performance of Junk Bonds and Emerging Market equities and disastrous performance of commodities reveal just how difficult real economic life has been in recent years. Developed equity markets have risen under the illusion that QE creates wealth. Developed markets are vulnerable here and the price action at the end of last week has a bearish look to it.

Even in the US, which remains the best performing market when simply looking at the major indices, the average stock is not doing so well. Indeed, the broader New York Stock Exchange Composite Index has now made no progress for two years, and technically appears to be at risk of breaking down from a very large topping formation. 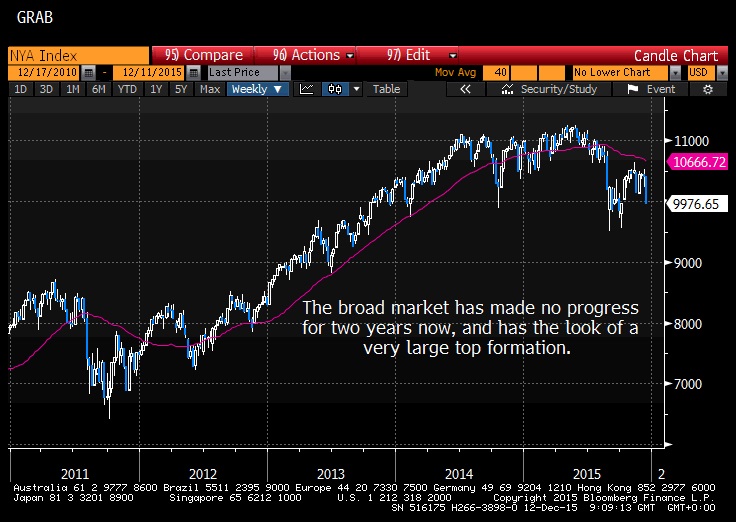 As we have been saying for months, the reward for buy and hold investors at this juncture appears to be very limited indeed, and the risk of a bear market is increasing.

With the Fed due to meet next week to decide whether to raise interest rates for the first time in 9 years, markets are understandably nervous about what this may mean. For us, we are watching price action more than the Fed. If equities continue to sell off, and bond yields decline, then our belief that developed equity markets are in a primary bear market will only be strengthened. Furthermore, lower equity markets will only increase the probability of a US recession next year.

Having seen central banks expend a huge amount of monetary policy energy in creating the illusion of wealth, we may well be at the “Emperor has no clothes” juncture. This is a time for wealth preservation, and furthermore, liquidity will become extremely important in a primary bear market, and the the return of capital will become more important than the return on capital.

Please note that RMG will be launching a UCITS compliant version of its successful FX Strategy in December. Should you wish to receive any information on the fund, please visit the website HERE.