Cattegatt Secondaries, the London based specialist broker for private equity and illiquid hedge funds interests, reports that over the last nine months, the pricing of hedge fund side pockets continued to improve relative to previous trading periods. This can be attributed to an improved economic landscape which has resulted not only in better market liquidity but also a more active M&A climate for exits. As a result, the time investors have to wait to get their funds back has lessened, thus making these type of illiquid securities more attractive. 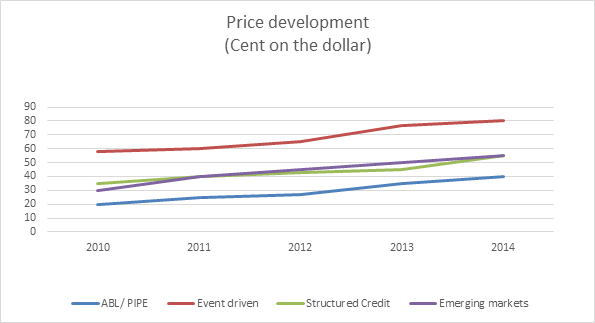 The $100 billion market for illiquid hedge fund side pockets started in 2009 and was predicted to last for one or two years until it was cleaned up i.e. the illiquid holdings had been realized and turned into cash.  The market recovery lingered however, causing slower than anticipated conversions. The improved economic climate over the last six months, has increased the activity of deal flows from investors. The reason for this is that not only have discounts narrowed due to increased transparency and market liquidity, but also there are now more investors interested in these type of assets.

There has been a surge in interest for hedge fund side pockets from an increasing number of buyers. Prior to 2013, the secondary market was dominated by a few highly informed specialised investors, since then, and especially this year, a wider audience of alternative investors have started to bid on these assets, as a result of the lower perceived risk due to the improved climate, bringing more clarity to the underlying values.

While previous years may have been characterised by larger portfolio sales from forced sellers and only a handful of buyers, deal flow seen by Cattegatt over the last 12 months has featured an increased amount of smaller pieces from motivated, but yet price sensitive sellers, which are being ‘auctioned’ to the best bidder from amongst a cluster of competitive buyers. These are typically holdings that investors have chosen to keep, despite their high maintenance to administer, as opposed to sell at a steep discount; a sale which now, however, can be avoided.

The second type of deal flow observed by Cattegatt has been so called managed exits from seed investors i.e. large investment banks or asset managers that once took a large share in hedge funds in return for seed capital. These can be rather sizable and sensitive transactions for which Cattegatt’s highly bespoke and boutique style brokerage is well suited.

A third type of deal flow reported by Cattegatt has been more esoteric hard- to- value and hard- to- sell assets. Even though asset prices have also improved here, they are still steep, especially considering the fact that some managers are prepared to bid at only a fraction of their reported face value. These are typically distressed, non-performing holdings for which no reliable or current valuation exists. These type of side pockets attract fewer buyers than the high grade funds, but still more than a few years back, offering a good relative opportunity to clean up any legacy holdings.

Finally, Cattegatt reports an increased number of investors using the secondary market for ongoing but closed funds. These are typically funds with less liquid redemption terms and which trade at prices close to par or even at a premium, depending on the quality of the fund manager. Using the secondary market is attractive for managers when rebalancing their portfolios, since it not only gives them access to liquidity but also enables them to deploy capital to attractive opportunities in a time effective manner.

Cattegatt Capital Ltd is regulated and authorized by the Financial Conduct Authority (FCA)  in the UK. http://www.cattegatt.com