HOME
Contact Us | About Us
You are here: Home » Shorts and Humour » Nov 15 Was Peak of QE Impacts

From Grant Williams‘ commentary Things That Make You Go Hmmm

In years to come, when financial historians look to pinpoint the precise moment in time when the excesses of Quantitative Easing reached their apex, I suspect that November 15th, 2017 may well be the date upon which they settle.

On that Wednesday, on opposite sides of the Atlantic Ocean, two events occurred which – once hindsight provides its inevitable clarity – will, I believe, provide the perfect crystallization of both the degree to which central bank-inspired asset price inflation has run amok and the utter folly of the negative interest rates inspired by those same academic assassins.

Were it possible to bring lawsuits against the men and women holding the highest financial offices in the world for financial malfeasance in an attempt to recover losses, then these two near-simultaneous events would be submitted as exhibits A and B in the biggest class action suit ever filed.

The two events on November 15 are: (1) the sale at auction of Leonardo da Vinci’s Salvator Mundi for $450.3 million – we’re talking here about a painting that sold for $10,000 as recently as 2005 – and (2) Société Générale’s overwhelming success of in selling €500 million in 3-year senior unsecured zero-coupon bonds of Veolia, a former water and wastewater treatment provider turned global entertainment wannabe. The unsecured notes were priced to yield -0.026%. That’s right, a BBB-rated company managed to convince investors to pay them, at issuance, for the privilege of lending the company money.

My suggestion is that in years to come, when financial historians look to pinpoint the precise moment in time when the excesses of Quantitative Easing reached their apex, I suspect that November 15th, 2017 may well be the date upon which they settle.

But the global financial firmament is beginning to shake, rattle, and roll. The US Treasuries yield curve is threatening to invert, and there is an incipient seepage of asset-price inflation into the Consumer Price Index (CPI) and wage inflation (let’s not forget that US unemployment is at a 17-year low).

This risk assumption with BBB paper is part of a wider phenomenon which this chart highlights beautifully: 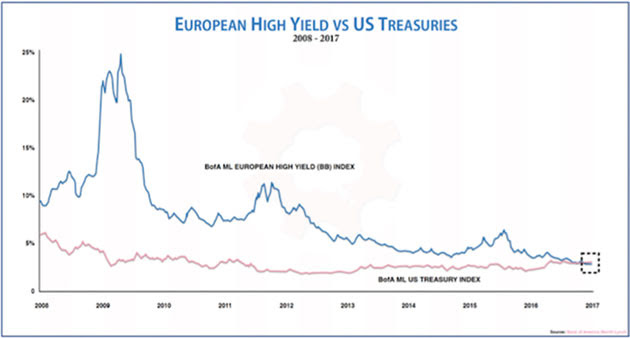 Bond markets have also reached the blow-off insanity phase BUT, that insanity is being concentrated in places where a guaranteed central bank bid makes a lot of sense and provides a huge tailwind to investors who are once again bent over at the spigot and drinking as fast as they can.

This extract is part of Williams’ essay “Et Voilà”. See the whole essay via ttmygh.com