HOME
Contact Us | About Us
You are here: Home » HF Managers » Millennium Capital Leads the Large US Managers in Europe

One of the consequences of the Credit Crunch of 2008/9 was a scaling back by hedge fund managers – they cut their gross, they restricted redemptions, and, in managing their companies through a traumatic period for the industry, the larger managers often reduced headcount or closed their offices in Asia and London. When there were strategic cost saving measures made post-2008 it was more likely that the Asian outpost of a US hedge fund group would be scaled back rather than the London office. Often there was a pause in hiring in Europe – as seen in the time-series of the number of Approved Persons* registered with the UK’s FSA for Davidson Kempner European Partners and Moore Europe, graphics 1 and 2 below.

Graphic one: Headcount of Approved Persons (Staff Registered with the Regulator) at Davidson Kempner European Partners in London Since 2004

Less typical in management of headcount of the US firms with London offices was Steve Cohen’s SAC, which had operated in London since the turn of the century through Walter Capital Management. SAC scaled back the investment, compliance and senior management staff in its London operations (renamed S.A.C. Global Investors) by about a third in 2008/9, as graphic 3 below shows. As events unfolded and financial markets returned to something more like normal in the years after the Credit Crunch, SAC increased its headcount in London, just as it did in its Connecticut headquarters. The expansion phase post-Credit Crunch at SAC in London included the re-hiring of some traders let go less than a year previously.

Graphic three: Headcount of Approved Persons at SAC Global Investors in London Since 2004

Source: Financial Services Authority Register/IMAS
Staff numbers at SAC in Europe have continued to be managed on a flexible basis, in that the Euro shock of May/June 2011 coincided with the peak in professional staff, and a net 8 traders and other professionals (those that have be registered with the FSA) have left since. It could be said that SAC has been particularly proactive in managing its head count to short term business conditions compared to most US managers with London offices.
Graphic 4 is a table showing the American hedge fund firms with the 20 largest staff teams in London.  Only four firms (Moore Capital, Millennium, Citadel and Tudor) have 40 or more traders and portfolio managers based in Europe’s financial hub. Only 13 US-controlled hedge fund firms have professional staffs of 20 or more, as reflected in Approved Persons registered at the FSA. And by inference, less than 20 American hedge fund firms have total staff numbers of 30 or more.
Graphic Four:
The 20 US Controlled Hedge Fund Groups With the Largest London Headcount At The End of 2011 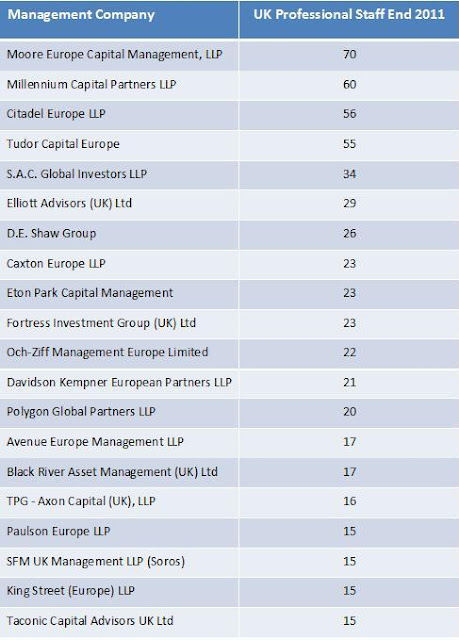 Source: Financial Services Authority Register
Looking at just the 30 American-owned hedge fund firms with the largest London offices, Table 5 ranks the firms with the largest increase in headcount over the last year. Across all 30 of the funds analysed in detail professional staff numbers went up by a modest 6% in 2011. This is only a few dozen staff across all the firms covered, and a third of the surveyed firms showed exactly the same (professional)  headcount at the end of the year as they did at the beginning. So the overview is one of stability in market-focused human resources for the European outposts of these firms, with some modest expansion at a minority of hedge fund management companies.
Izzy Englander’s Millennium Capital Partners is the standout. The firm has been in expansion mode on the back of good results – its Millennium International Fund was up over 8% last year. It turned out to be good timing for the firm to hire its first head of marketing, John Novogratz, in the first half of last year, and he had some early wins as firm-wide assets went from $9.2 billion to $11.6 billion in 2011. The increase in AUM over 2011 has given scope to add to capacity in Europe, and Millennium has added 22 FSA registered staff members including traders.
Graphic Five: Ranking of Change in Headcount Amongst UK Staff of American-Controlled Hedge Funds 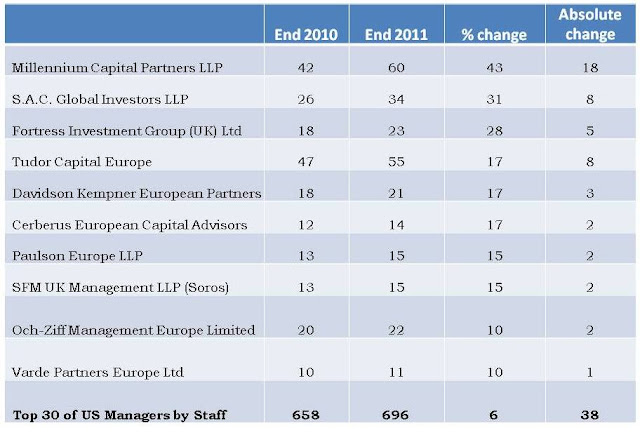 Source: Financial Services Authority Register
The absolute numbers of staff added are not large for most of the firms in Table 4 and 5, and so there is some reluctance to draw inferences for most of the firms cited. That written, firms that trade as much as invest for a living are a feature of the ranking of firms in expansion mode – SAC, Tudor, Soros Fund Management to an extent, and Millennium.
On the other side of the coin, Table 6 shows the American hedge fund groups that that shrank their professional staffs over the last year.
Graphic Six:
Ranking of Change in Headcount Amongst UK Staff of American-Controlled Hedge Funds – Declines

Source: Financial Services Authority Register
Again the changes in numbers are small in absolute terms, so frictional turnover may account for the changes in staffing in Table 6 and the shrinkage may not necessarily be through management decision making. The only generalisation drawn is that event driven managers are a feature of the list, and give what has happened to markets in 2011, a large reduction in public market transactions makes resource re-balancing in that strategy understandable.
American Management Compared to European Management
Finally, there is a comparison available for how the top American hedge fund managers manage their London-based offices compared to the top European hedge funds. In November an analysis of the staff registered with the FSA for hedge fund groups indigenous to London was carried out here.   The analysis of Europe’s top managers covered the changes in human resources over the year to the end of August 2011. By one of those strange coincidences, the top managers in London in aggregate had added 6% additional professional investment staff over that period of 12 months, the same percentage as the top 30 US-controlled firms have added over the last year.
Employment is a lagging indicator in macroeconomics, and the hedge fund industry is no different in that business conditions have to be stable for some time before managements assume the risk of adding to their cost structure for staff. Provided that December redemptions are at the level indicated by the industry scuttlebutt (GlobeOp data and the like) it can be assumed that we will see a steady if unspectacular increase in hedge fund employment in London in the first half of 2012.
* Approved Persons are those registered with the Financial Services Authority to carry out regulated activities – all partners in a partnership and those carrying out specific duties, such as CFO, CEO, senior operations staff, compliance officers, and traders and portfolio managers.  Staff not registered at the FSA can nearly equal in number those registered with the UK’s financial regulator where firms have local middle and back office operations, a marketing presence in Europe and/or risk management and technology staff.