HOME
Contact Us | About Us
You are here: Home » Risk Management & Consulting » Investing With The Chimp In Mind

When Conn’s Inc. reported its

The price action raises a series of questions for investors: Which longs got shaken out at the wrong price? Which shorts got killed doubling up as Conn’s stock price fell? And what distinguished the winners from the losers in this everyday tale of a market over reaction?

If we look to the wisdom of Warren Buffett for an answer it’s unlikely the winners and losers were separated by their comparative intellects. Buffett has long since told us “investing is not a game where the guy with the 160 IQ beats the guy with 130 IQ.”[1]

Whether investors got burnt in the face of Conn’s price action or whether they danced all the way to the bank is much more likely to have been determined by how well they managed their emotional reaction to the company’s earnings release. Buffett asserts “you can’t let your emotions get in the way of your mind.”[2] But he left it up to Charlie Munger, his number two in command at Berkshire Hathaway, to tell us how to achieve that.

It turns out: it’s all about investing with the Chimp in mind.

The Role of Emotions in Investor Decision Making

In The Social Animal David Brooks recounts the plight of Elliot, a man who had a tumor that damaged the frontal lobes of his brain.[3]

Elliot was intelligent; he had a high IQ, and he could hold a perfectly good conversation with the specialist investigating his condition, Antonio Damasio. But his life was unravelling because he was incapable of making choices that matched his intellect. In fact, for the most part Elliot could not make any choices at all.

The damage to Elliot’s brain meant that he was incapable of experiencing emotion. And because he could not detect how he felt about a prospective decision, he was unable to action any decision.

Typically, even when Damasio suggested something as seemingly trivial as two alternative dates for a follow up meeting with patients like Elliot, they would dive into an analysis of the pros and cons of each – and then get stuck in the expanding decision tree of their analysis without being able to arrive at a conclusion. To unlock this cycle Damasio would have to interrupt his patients’ thinking and assign a date for them to return, at which they would agree immediately.

Welcome to Your Chimp

In the same way, no decision about where a stock should trade comes without investors tapping into how they feel about the stock, or about the analysis they have conducted into it. The key is for investors to interrogate how they feel in order to improve their rationality, rather than undermine it.

Dr. Steve Peters, the mind coach to the British track cycling team, which has enjoyed multiple gold medal success at the last two Olympics, likens the emotional part of our brain that generates these feelings to a Chimp.[4]

In order to protect us from danger and to incline us towards gain, our Chimps are on constant alert for risk and opportunity. That is why they process information five times faster than the capacity of the ‘Human’ in our brains to think, and to apply reason and analysis. (It’s your Chimp that enables you to recoil from a striking snake even before you know whether you are in the snake’s strike zone).

The problem with our Chimps, however, is that, once something arouses them, they don’t wait for all the evidence to come in. That’s not their job. They exist to get us to pay attention and to react instantaneously. What we do after that is up to our Humans.

And that’s where the challenge presented itself for those investors that were either long or short of Conn’s when it released it earnings.

Chimp First on the Earnings Call

Conn’s Inc. is a specialty retailer that operates in over 70 locations in the south western states of America. The company principally sells home appliances, a variety of consumer electronics products, and furniture to a target customer base of low income families.

A critical component of Conn’s business model is that it provides in-house credit to its customers. Indeed, over two thirds of Conn’s retail sales are to customers who are simultaneously taking out a loan from the company to make their purchase.

Beginning with new leadership nearly three years before, Conn’s had intensified its focus on this target customer base, broadened the assortment of products in higher margin categories, initiated new store openings and improved its marketing, which in aggregate had  generated accelerating  growth. Its stock price had more than doubled in the prior year. It had therefore attracted a lot of fans – and a large number of sceptics.

On September 5 Conn’s released results below analysts’ earnings estimates, yet it reaffirmed its earnings guidance for the full year.

While the company does not provide quarterly guidance it itemized the impact on earnings of a temporary problem, without which all other aspects of the company’s earnings report would have exceeded analysts’ estimates. That problem was a software issue in its debt collections department that meant that some customers who had begun to miss payments had slipped off the company’s collections radar, without Conn’s being able to help them get back on track.

Conn’s had fixed the software problem by the time of the earnings release and was able to report that collections were returning to normal. Nonetheless, it had to report a rise in delinquent loans in the period.

It would be nice to think that investors long of Conn’s when the bad news hit registered their unease and proceeded to test whether the unexpected deterioration in delinquencies signalled a fundamental change in the company’s business economics.

Equally, it would also be reassuring to imagine that those investors who were already short the stock before the announcement did the same when it gave them a jolt of satisfaction.

Unfortunately for both camps, that’s not how the interface between the Chimp and the Human naturally works.

If you are like most people, you will probably give the keyboard higher marks than your fellow tester.[5]

This is because when you hold the pen between your teeth it forces you to adopt a weak smile. Your brain detects the smile and asks why are you were smiling. Then it uses its analytical ‘skills’ to supply the answer in the shape of ‘it must be because I like this keyboard.’

Conversely, your colleague is forced to adopt a frown. Her brain detects the frown. It asks why she is frowning – and the rest is history.

This is how we frequently decide.

We tend to look for reasons that support our emotional reaction to an object. And that means how our Chimp brains feel frequently becomes what our Human brains end up thinking.

This largely happens at a subconscious level. It also features a twist via which the Chimp hijacks the capacity of the Human to think clearly about how it feels, so that the Chimp’s first conclusion becomes entrenched in the Human’s decision making.[6]

This is Buffett’s killing ground: where “investors allow emotions to get in the way of their minds.”

In my opinion, it’s also where many short and long investors in Conn’s will have been burned in their reaction to the company’s earnings release. The trigger phrase in Conn’s discussion of its results – “delinquency unexpectedly deteriorated” – is likely to have sparked a violent emotional reaction in both long and short investors in the stock.

The longs would have immediately felt unsafe: the shorts euphoric (‘at last, this story is unwinding’).

Now the risk for both parties is that they will use the analytical skills of their Human brains to find evidence in support of how their Chimps feel.

In one sense, this would be easy for the shorts. The news (and the stock) is moving in their direction, and they have all the evidence they need. Time to double up. 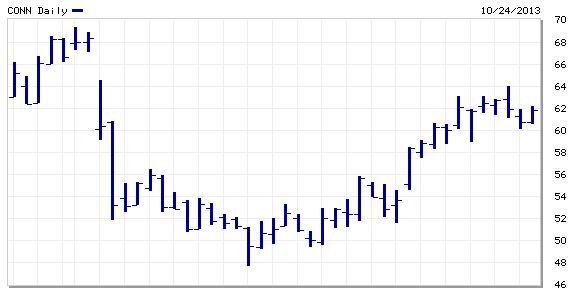 It may have been slightly different for the longs.

Objective data in Conn’s earnings release supported the notion that Conn’s business model was intact and that its collections issue was a one-off event, resulting in a non-cash increase in loss provision of just $6million – making the associated loss in market value more than a 100:1 over reaction.

But every long investor will have felt uneasy about the Conn’s release (and sick in the stomach by the stock’s immediate reaction), and it will have been easy for them to move from there and find evidence in support of how they were feeling (to whit ‘I knew Conn’s was lowering its credit scores, and now I’m seeing the consequences’). That’s why some will have capitulated as Conn’s price fell below $51.

Critically, once how we feel becomes what we think, our Chimps delight in the Human’s capacity to find information that confirms the conclusion this process arrives at. And it gets high on the Human’s ability to use any information to prove how right their conclusion is – including additional information provided by the company in its earnings call that should have ‘objectively’ contradicted the bears’ version of events.

A third category of investor that made money out of Conn’s stock market crash and resurrection is likely to have understood the evolutionary importance of the Chimp’s role in their decision making.

In doing so, they will have embraced a version of Charlie Munger’s advice to engage in two-track analysis.[7]

That is; they will have registered

their instantaneous Chimp reaction to Conn’s release. Then, before acting, they will have considered: how does my Chimp feel versus what does my Human know about this new news?

Essentially, this type of investor creates the space to determine whether his Chimp is picking up on something that may be predictive of Conn’s stock price performance (such as a fundamental change in the company’s economics), or whether the Chimp is simply reacting to something that is not so material to the company’s valuation (e.g. just to the fact that it has been surprised).

More importantly, it enables the investor to park how his or her Chimp is feeling and to go in search of objective evidence that speaks to Conn’s future economics – a search that includes a deliberate attempt to find information that contradicts, rather than which confirms, any initial Chimp-based conclusion.

Conn’s stock price recovery (to date) suggests that investors that engaged in such two-track analysis found a piece of critically important information in the company’s earnings release and commentary that some Chimps chose to suppress. This pivotal information was that the increase in delinquencies Conn’s experienced in the second quarter occurred across all vintages of originations, therefore implying that the increase was NOT a result of increasing lending risk. Had all the shorts and all the longs practiced investing with the Chimp in mind they may have arrived at the same insight.

James O’Loughlin is the author of The Real Warren Buffett: Managing Capital, Leading People and CEO of JOL Consulting, a company that works with fund managers to improve their performance. He can be contacted at James@jolconsulting.com

[3] David Brooks, The Social Animal: A Story of How Success Happens, Short Books, 2011

[6] Carol Travis and Elliot Aronson, Mistakes were made (but not by me): Why we justify foolish beliefs, bad decisions and hurtful facts, Harcourt Inc. 2007