HOME
Contact Us | About Us
You are here: Home » Investors » Importance of Funds of Funds to Newer Managers Evident in Seward Kissel Study

Driven by our ongoing commitment to understanding the dynamics of the hedge fund marketplace and bringing the latest industry color to our clients and friends, each year Seward & Kissel conducts various studies of the most important trends we are seeing that are impacting the hedge fund community. This year, for the second year in a row, we have conducted a study covering side letters negotiated by our hedge fund manager clients during the period July 1, 2016 through June 30, 2017 (the “Study”).

The Study is broken down into four parts: the Managers, the Investors, the Terms, and a newly added Comparison to Separately Managed Accounts. The four parts of the Study, when read together, provide valuable insights into the negotiation with hedge fund investors in the current
environment.

■ The average regulatory assets under management (“RAUM”) of the Mature Managers in the Study was $4.37 billion. With respect to Newer Managers, other than some outlier data, none of the managers were SEC-registered, and thus we estimate that their average RAUM was less than $150 million;

■ Fee discounts and most favored nations (“MFN”) clauses were the two most frequent side letter business terms; and

■ Similar to side letters, in the context of separately managed accounts, funds-of-funds were the most frequently seen type of investor.

(I) The Managers
The average RAUM for the Mature Managers within the Study was $4.37 billion (based on their most recently filed Forms ADV) and approximately 90% of them were registered with the SEC as investment advisers, with the remainder qualifying as exempt reporting advisers. With respect to Newer Managers, other than some outlier data, none were SEC-registered, and thus we estimate that their average RAUM was less than $150 million.

(II) The Investors
The six principal types of side letter investor categories that consistently appeared within the Study, in order of frequency, were: (1) funds-of funds; (2) wealthy individuals/family offices; (3) government plans; (4) endowments; (5) non-profit institutions; and (6) corporate pensions. 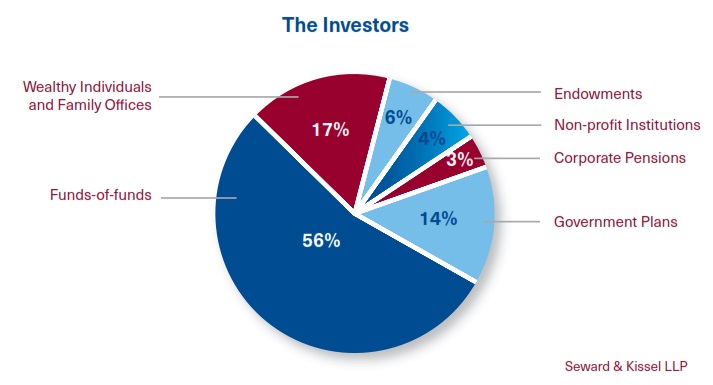 The average dollar amount invested via side letter with Mature Managers was $82.62M, while the average for Newer Managers was $53.65M. The biggest investment amounts by far came from government plans, with an average investment of $163.4M, followed in descending order by funds-of-funds with a $73.19M average, non-profit institutions with $47M, endowments with $40M, wealthy individuals/family offices with $17M and corporate pensions with $10M. Finally, looking deeper at funds-of-funds and wealthy individuals/family offices, as between the two types of managers, the average investment size for the funds-of-funds category was $81M for Mature Managers and $57M for Newer Managers, while for the wealthy individuals/ family offices category, the average amounts were $21.6M for Mature Managers and about $5M for Newer Managers.

With respect to liquidity, the Study solely focused on an investor’s ability to redeem from a fund earlier than other investors (i.e., preferred liquidity), and not on other commonly seen liquidity-related side letter terms such as clarifications relating to gating, in-kind distributions and/or suspension clauses. The Study also did not cover other terms often seen in side letters that are of a regulatory or similar nature.

The most frequently observed business term within the Study was a fee discount, which appeared in 49% (up from 40% in 2015/2016 Study) of the side letters (and which displaced MFN clauses as the most commonly seen term). Of the side letters with fee discount clauses, 65% lowered both the management fee and the incentive allocation, 29% reduced just the management fee and 6% discounted only the incentive allocation. Note that, similar to the prior Study, in about a third of the side letters that included fee discounts, the discounts were contingent upon the side letter investor agreeing to a longer lock-up. MFN clauses were seen in 47% of side letters (down from 56% in the 2015/2016 Study), and all of them contained a bundling or package concept providing that if a preferential term (e.g., a lower fee) was given to another investor contingent upon a less favorable term (e.g., a longer lock-up), the MFN holder would have to accept the bundle or package of rights, and could not select just the favorable term.

(IV) Comparison to Separately Managed Accounts
Certain institutional investors prefer investing with hedge fund managers via a separately managed account (“SMA”) as opposed to directly investing through a hedge fund for a variety of reasons, including due to customized investment strategy, portfolio transparency and asset segregation preferences, among other things. Therefore, as part of the Study, we decided to look at SMAs entered into by our clients during the same period. The pertinent results were that:
(1) 76.9% of the SMAs were with Mature Managers,
(2) 69.2% of the SMAs were with funds-of-funds and 23% were with wealthy individuals/family offices, and
(3) over 80% of the SMAs had fee structures typically not found in the non-founder classes of hedge funds, including for example, lower rates, sliding scale rates and/or hurdles on incentive fees.