HOME
Contact Us | About Us
You are here: Home » HF Managers » Hedge Funds to Step Up In LBO Market in Europe

Just like the private equity business, Leveraged Buy Out (LBO) activity is usually subject to a cycle related to that of the stock market with a lag. On top of that in Europe there used to be laid a secular growth in LBO volume, and a long-term trend towards a wider variety of buy-out financing arrangements – reflecting the growth of mezzanine finance, the high yield market in Europe and credit hedging instruments. All that changed with the Credit Crunch of 2008-9, and some of the consequences of that period for the LBO market have been covered a couple of times articles here (1,2). The changes to the market have opened up some gross opportunities which hedge funds are expected to seek to exploit.

Market characteristics change through time – the activity levels, risk appetite and capacities of different market participants expand and then shrink – and hedge funds have sniffed an opportunity in the shifting dynamics of this market. The market for debt for acquisitions in Europe will be explored with information from the DLA Piper Reports on the subject.

The summary of the DLA Piper Report for 2012 outlines a number of challenging conditions, in terms of liquidity, pricing and changes to capital structure requirements for new deals. The results also highlight the extent to which the risk-averse nature of banks and the predicted rising cost of debt funding are steering the markets toward alternative funding sources, alternative funding structures and own-cash/equity reserves. It states:

·         The economic rationale for companies to consolidate will only intensify in the coming years and this, together with need for the refinancing wall to be addressed and private equity houses needing to exit investments and raise new funds, will continue to drive opportunities for growth in 2012.
·         However, the Eurozone crisis and a prolonged economic stagnation outside of Europe has led to a marked slowdown in activity and a freeze on liquidity. Renewed pessimism across the banking sector about the prospects for acquisition finance is likely to add further pressure to a market already under strain.
·         Whilst an uncertain economic outlook has resulted in a more cautious and conservative approach to investment decisions, an increasing number of companies are sitting on large cash reserves. M&A activity in 2012, as a result, is likely to be led by strategic trade buyers flush with cash, with sector considerations continuing to strongly influence support for deal activity.”

The inability or unwillingness of banks to provide the senior levels of debt to new deals in Europe will impact the scale of the whole new issuance market, and the complexion of others providing that  funding. The constraints of re-building bank capital ratios will impact the volumes of deals they can commit to. This will impact price as well as volume of deal financing, illustrated below. Banks were expected to be 70% of the market last year, but this year and they are expected to be only 42% of the market. In addition PE specialist debt funds are expected to constitute less of the market this year (7.0% versus 14.7% previously).  The finance providers taking up the share dropped by banks and PE debt funds are pension funds, CDOs and hedge funds. Whilst the DLA Piper surveys looks for CDOs to increase their share from 3.2% to 15.7% of the market, that does not look credible, unless CDOs have themselves found new sources of funding and/or they extend their lives. That leaves just two categories of investors with scope to grow in share of the senior debt for acquisitions in Europe – pension funds and hedge funds.

Pension funds have an appetite for fixed income paper with a yield to match their liabilities which it is increasingly difficult to match in the sovereign debt markets. Similarly higher quality corporate bonds don’t provide the yields they did. So it is quite plausible that pension funds will help fill the demand for debt for acquisitions in 2012 to a much greater degree than they did last year, but still market participants expect them to be less than 10% of the market (9.3%, up from 5.3% in the previous survey). That leaves hedge funds as the swing demand providers.
There is nothing that hedge funds like more than being the marginal demand in a market, such that they are the price makers rather than takers. According to the DLA Piper survey hedge funds are expected to be syndicated as much as 25.6% of the debt for acquisitions this year in Europe, up from just over 7% in the previous year’s survey. If that is true there could be significant changes in typical pricing on deal financing. American hedge fund groups with experience in credit/high yield investing, such as Cerberus, Highland Capital, Fortress Investment Group, and King Street (Europe) are likely to get involved. The big local names in Europe that specialise in leveraged loans are GSO Capital (part of Blackstone), Harbourmaster Capital and Cairn Capital. The large multi-strategy and fixed income European hedge fund firms such as CQS and Brevan Howard have credit hedge funds that are already active investors in primary and secondary loans. A longer list of participants in leveraged loans in Europe is given below in Table 1.
source: Simon Kerr on Hedge Funds
The different approach to risk/reward taken by hedge funds compared to banks will impact the way deals are constructed when M&A does occur, and may facilitate deals which banks would turn down when they were the much more dominant source of loan finance. For example, retail and consumer-facing businesses have not been the subject of much consolidation or MBO activity recently because of macro concerns, and, where deals have taken place in those areas, low leverage has been forced on the deal-makers. Neale Broadhead, Managing Director, Acquisition Finance at Lloyds Banking Group is quoted in the DLA Piper Report as saying that “Sponsors will most likely look to non-Bank lenders to fund (these sort of) acquisitions, as these newer participants in the market (such as hedge funds) have flexibility on terms and a different attitude to risk compared to the traditional lenders.”
Here are the other major findings in the DLA Piper Report for 2012:
1) More of the deal flow is going to come from re-financings
It is no surprise that re-financing is expected to be more of a focus this year, given the broad appreciation of the wall of refinancing ahead of the European market for debt for acquisition. It would be sensible for some corporates and owners of corporate assets to get ahead of the wave and conduct the necessary re-financing negotiations in 2012. This is reflected in the DLA Piper survey of market participants which makes re-financing as the deal type expected to lead the market this year. The need for private equity to refresh their portfolios as funds mature and cash needs to be committed is also reflected in the survey as Secondary/Tertiary buyouts are the second most popular category in expectations to lead deal volume.
2) It is going to be more expensive to arrange debt funded acquisitions in Europe
Expectations for typical arrangement fees in 2011           Expectations for typical arrangement fees in 2012 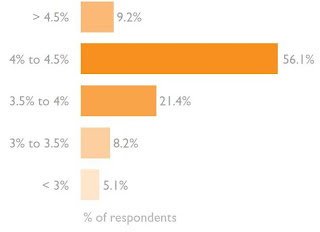 source: DLA Piper
As you can see, the expectation of typical arrangement fees amongst participants in the DLA Piper survey have shifted upwards in comparing this year with the previous year (2011 report). For 2012 over 70% of those surveyed thought typical fees would be over 4.25%. Last year a similar proportion of respondents (77%) saw fee levels typically falling between 3.5 and 4.5%.
3) Vendor pricing is expected to be weaker in 2012 than previously. Sixty percent of those surveyed expect a weakening in vendor pricing this year, and only a third expected pricing to remain the same as 2011.
4) The deal terms are expected to be more conservative – less leverage in the balance sheet, more equity in a typical deal, and, in something of a multi-year trend, again less mezzanine finance in the structure.
The DLA Piper Report for 2012 contains a very good market overview from Paul Scott, Chief Investment Officer, Head of Sponsor Coverage EMEA at GE Capital. He said:
“I think we may be witnessing a profound structural change in the acquisition finance market. As commercial banks retrench to core markets driven by deleveraging of balance sheets and compliance with new capital requirements, new non-bank players are stepping up to fill the liquidity gap. As a consequence, while still more credit focussed, we could see the European market become more akin to the US model with greater risk adjusted pricing and leverage levels. High yield is likely to become more commonplace, although during 2012 this will be sporadic and leveraged loan underwriters will need to be smart and dip in and out of the market when liquidity generated by high yield repayments becomes available. The outlook for the market in 2012 is perplexing; with a fair wind volumes could be comparable to 2011 albeit a quieter H1 this year and a busier H2 which is a reversal of what we saw in 2011. Liquidity is there to get mid-market deals done but for larger transactions we are seeing an increasing short term trend to tap the US market for businesses with dollar exposure due to the excess liquidity there. Equally important will be creativity around deal structures as the dangers of a price expectation disconnect between vendors and buyers emerges due to uncertainty around future profit performance of target companies. Vendor loan notes and earn-outs are likely to feature more heavily. Clearly, what I’ve just said is predicated on an orderly solution to Greece’s sovereign position and no further contagion within the Eurozone which cannot be taken for granted.”

To an extent there are potentially rich pickings for the hedge fund industry whether the major re-financing required in the market happens or not over the next 2-3 years. If credit hedge or high yield hedge funds do not process the wall of re-financings ahead then the opportunity set for distressed investing hedge funds will become richer sooner. So if not one investment strategy, then the other will make out. Probably both sectors will benefit over a three-or-four year view, but if the distressed investors have a richer opportunity set in a year’s time then something very nasty will have happened in the European corporate bond market in the second half of 2012.