HOME
Contact Us | About Us
You are here: Home » HF Managers » Has Brexit Prospect Already Spooked US Macro Managers In London?

HFI has been tracking the trends in employment of American hedge funds in London since 2010. The links below this article show two of the previous related articles.

What prompted today’s article was the release of results from Fortress Investment Group  – a company that has been managing something of a retreat from hedge funds. The question I asked myself was to what extent the number of employees in their London operation reflected the loss of their macro funds businesses (Asian and US-based)? 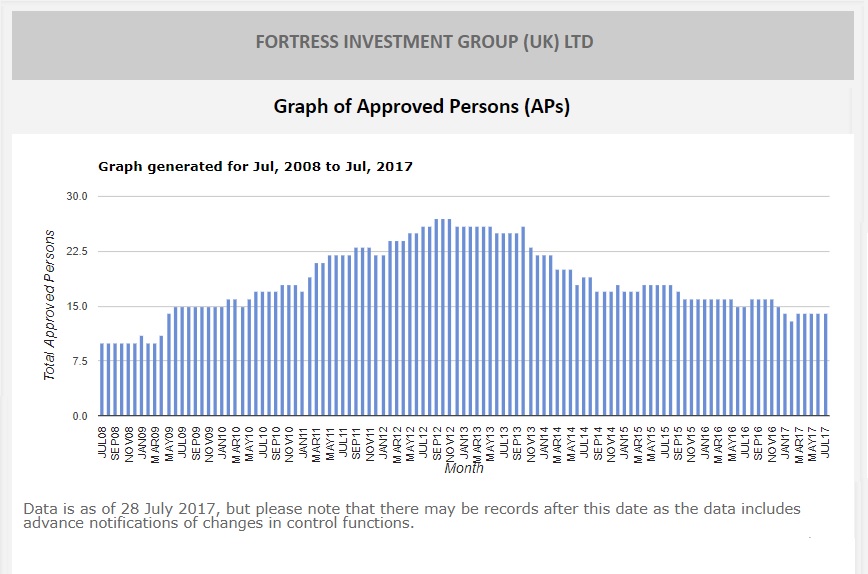 Clearly the number of investment staff and senior managers of FIG’s business in London peaked as long ago as late 2012, and since then has nearly halved (to 13/14 from 25). But Fortress runs private equity as well as hedge funds, and owns an excellent large fixed-income long-only business, which it is in the process of selling. So it is difficult to attribute the decline in investment staff solely to the shrinking hedge fund business. So is it possible to compare staffing trends to similar American hedge fund groups in London?

Four years ago HFI ranked American hedge fund groups with London operations  for staff numbers (APs). The firms with similar number of registered staff to Fortress were Highbridge Capital Management (UK) LLP (26 staff including Highbridge Principal Strategies (UK) LLP, only 8 in Highbridge Capital Management alone), Och-Ziff Management Europe Limited (27 staff in Autumn 2013), Polygon Global Partners LLP (26 staff in 2013)  and Graham Capital LP (25 staff, the same as Fortress in 2013). These are the staffing changes for this peer group over the same period as above. 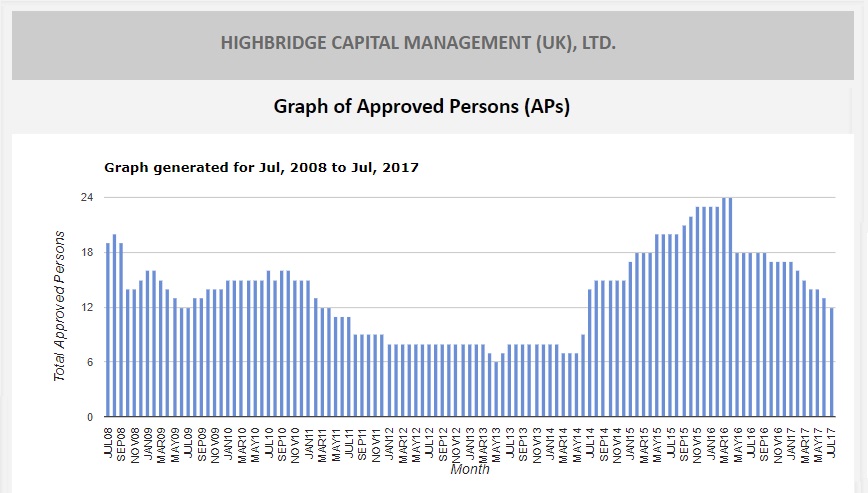 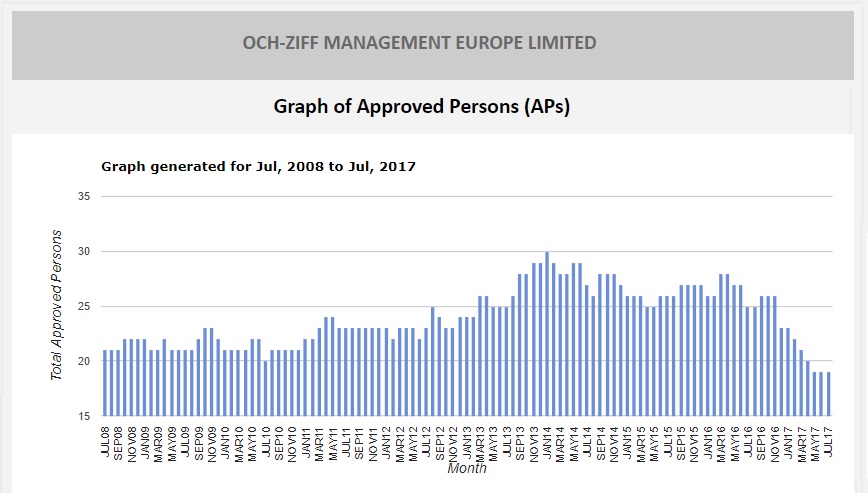 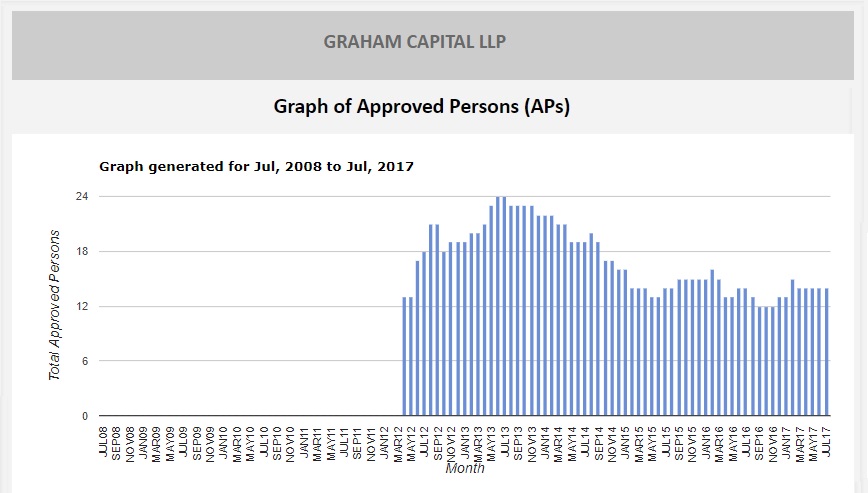 Both Och-Ziff and Graham Capital had similar London staffing trends as Fortress – a peak in late 2013 and down by nearly half in the period since. Of the two Och-Ziff is more like Fortress – a multi-strategy firm including private equity, and one that is publicly quoted. However an analysis of staff at Och Ziff shows that equity stock selection staff have been let go – analysts and PMs. Polygon is also part of a quoted asset management group, Tetragon Financial Group Limited (TFG), but Polygon has grown in terms of investment professionals after a re-configuring in the middle of 2015.

Highbridge is part of JP Morgan and going by staff numbers alone it has had a change of strategy since 2013 – first expanding aggressively, then cutting back from the time of the Brexit vote (July ’16).

If there was no consistency about staff changes of the American hedge fund firms which were like Fortress for staff numbers in 2013, what about the other largest firms at that time? In size order (largest in 2013 first) here are the other staffing trends as reflected in Approved Persons registrations. 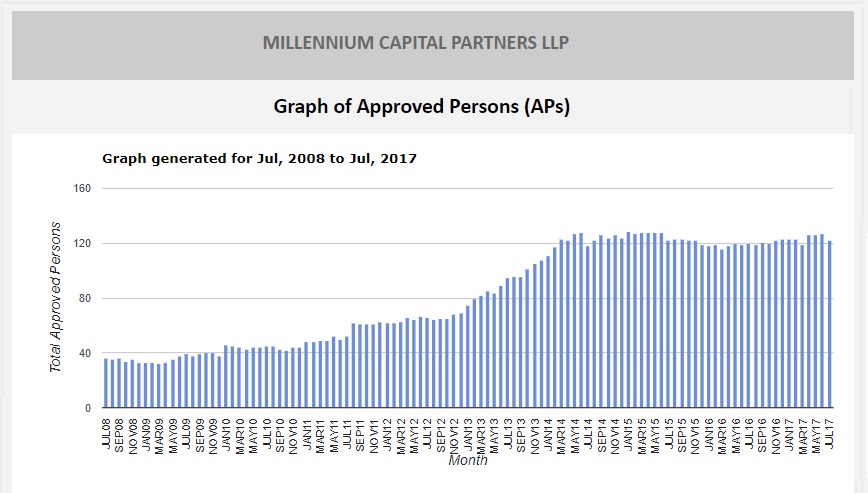 Millennium Capital Partners was the Daddy American HF firm in London in 2013 and remains so. Izzy Englander’s firm has maintained a large number of trading/investing teams in the UK, even after the Brexit vote. 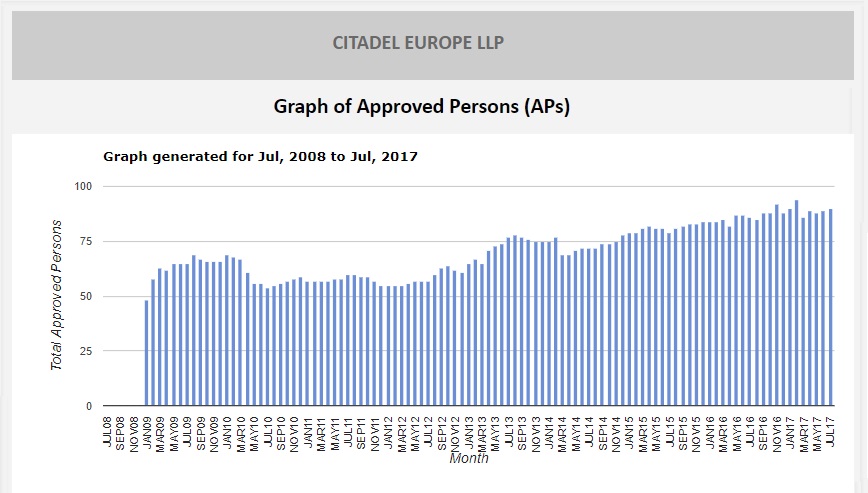 Citadel Europe is a mixture of trading, investing, market making and securities processing. So rather like Fortress it is difficult to infer from gross professional staff numbers what has happened to hedge fund staff numbers in isolation. However, given Approved Persons have increased at Citadel in recent years, it is unlikely that there are less hedge fund management staff than in 2013. But at Citadel it is quite feasible that they are down – the firm can be quite ruthless in the culls of staff, (see Gross Staff Turnover Is Not The Issue at Citadel).

Moore Europe has had its share of major management change in the period covered here. Louis Bacon no longer spends so much time in the London office, and Greg Coffey left in October of 2012.

The shift in power to New York is reflected in staff numbers – there are several times more staff in New York than in the Curzon Street office of Moore Capital now. Brexit may have accelerated an existing trend, but the margin pressures of having to cut fees on the firm’s largest fund (the Macro Fund) probably paid a part too. UK staff are down by nearly a third from the high of two years ago.

Tudor Capital Europe is rather like Moore Europe in that staff are having to pay the price for a long-established hedge fund firm having to cut fees on its flagship funds. It can be no coincidence that post-Brexit referendum the downtrend started. For one of the longest established American hedge fund firms operating in London, these staffing decision must be particularly tough. 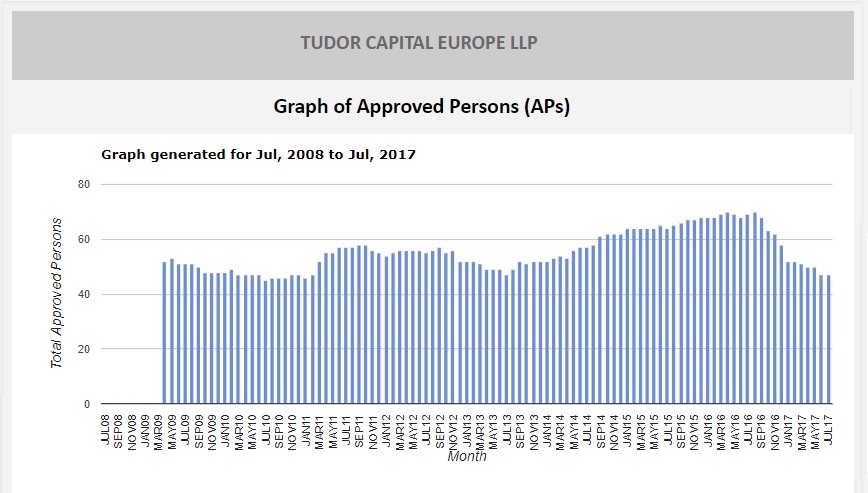 The London operations of Elliott Advisors have been gathering business momentum ever since they opened. The firm are, by now, well recognised for there activist stance on companies and are expert in European distressed investing. Few people in finance in Europe have to ask the significance of the name Elliott on a share register. They are unusual amongst their peer group in having more registered professional staff in London today than at any previous point. 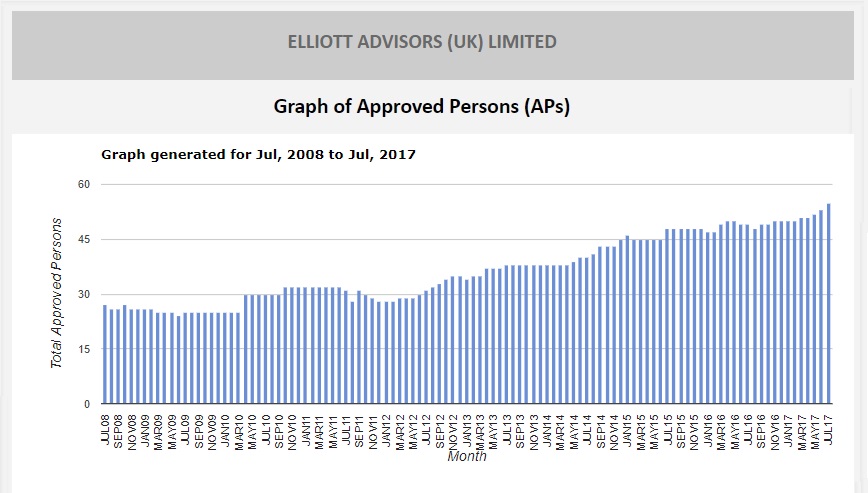 The sixth largest London operation of an American hedge fund in 2013 was SAC Global Investors. Point72, the family office of SAC’s Steve Cohen opened a London office last year. It has not been able to obtain a licence to manage other people’s money from London. It is unclear whether the firm has the same ambition (to build to 80 people) if it may only manage in-house capital.

Oaktree has operated in London since 2001, and a change in the registered entity accounts for the deceptively short history given below. 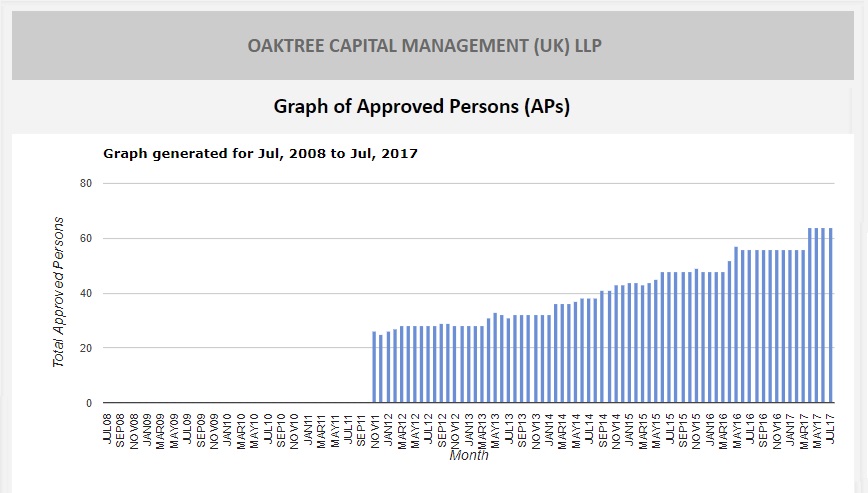 Oaktree Capital Management runs special situations and distressed credit strategies, and though these are cyclical strategies, and the firm does time capital raising for their strategies, staff numbers in Europe have risen smoothly over the last six years shown in the above graphic.

There are three remaining firms to round out the top 15 American hedge fund firms in London – Davidson Kempner, Caxton Europe and Blue Mountain Capital Partners. Davidson Kempner European Partners, which engages in merger arb and distressed assets investing, has consistently grown since the credit crunch, as has global macro firm Caxton Europe. 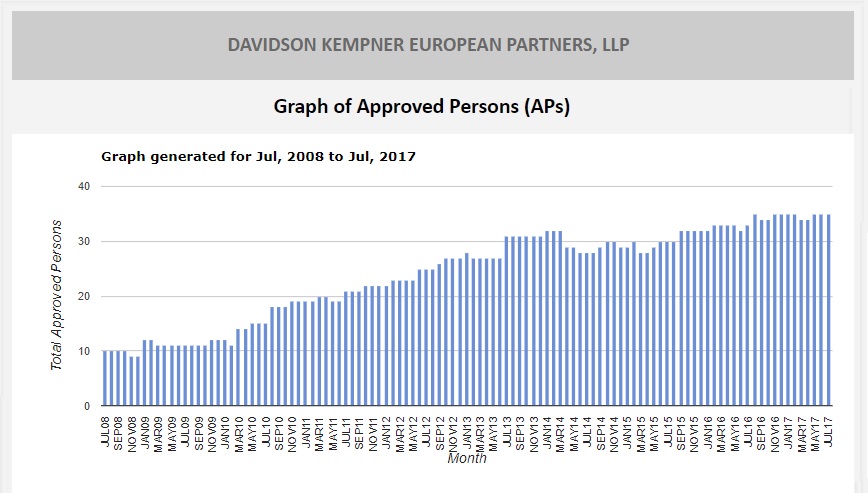 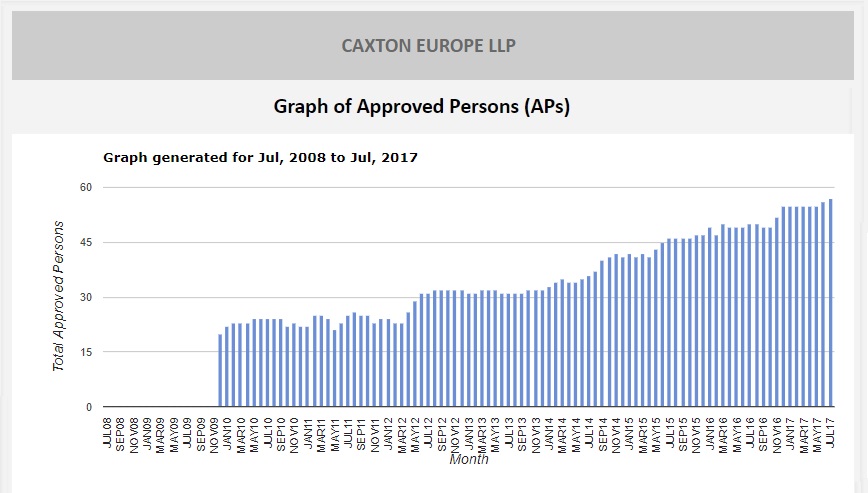 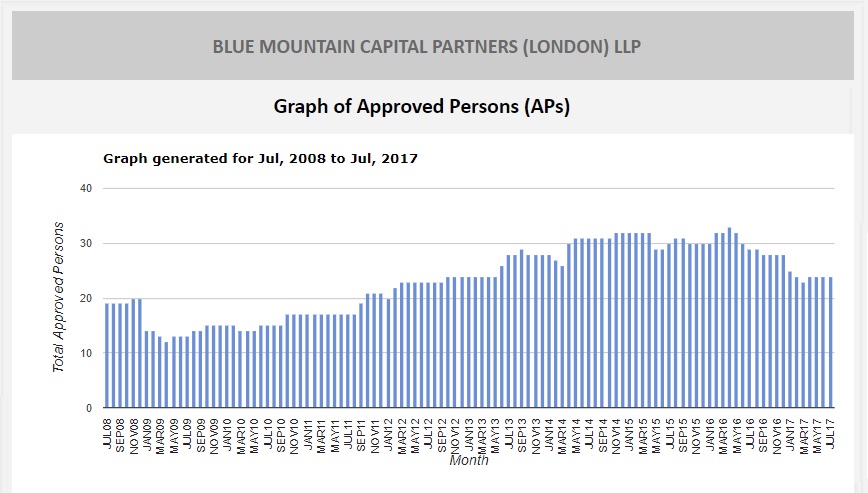 At credit and fixed income specialist Blue Mountain the London operation has grown on a consistent basis. Only in the last year or so has the professional investment staff, as reflected in the number of Approved Persons, declined for longer than a few months at a time. Staffing levels have dropped 20% since the first quarter of last year.

Staffing levels of hedge fund businesses over the long term mostly reflect the changes to assets under management, which itself is a function of the return stream(s) delivered. Often a lot of the return derives from the investment strategies pursued, with some idiosyncratic variance. Tudor, Graham Capital, Moore Capital and Fortress are all in some form of global macro investment strategy and have all shrunk. Davidson Kempner, Oaktree, Blue Mountain, Polygon and to an extent Elliott Advisors are each in special situations/distressed investing strategies and since the Credit Crunch those strategies have performed well.

Competitive pressures are also a factor in squeezing margins – fee cuts impact the top line and staff costs are the largest cost in a hedge fund firm. Strategic changes have an impact – exiting a strategy, losing a portfolio manager (and with him or her a team). Stay below the high water mark for more than 18 months and staff can get itchy feet, and walk of their own accord.

A big new factor is the impact of Brexit. Highbridge’s parent JP Morgan has stated that it will move hundreds of jobs from London because of Brexit, with potential for the units to be in the thousands if the outcome is a hard Brexit. Blue Mountain is a JP Morgan spin-off and like Och-Ziff, Moore Europe and Tudor Capital Europe there has been a pronounced down trend in high level jobs registered since the Brexit vote.

There may be other sound business reasons why some  leading American hedge fund firms are downsizing their corp of expensive staff in London, but the prospect of Brexit is not helping.

Millennium Capital Leads the Large US Managers in Europe (Jan 2012)