HOME
Contact Us | About Us
You are here: Home » HF Managers » Flat US Equities and Falling Yields Could Signal a Change in Markets

With the exception of last week’s US employment report, the US economic data released in recent weeks has been better than expected. Conventional wisdom would have us believe that if the US economy is improving and the Fed is withdrawing stimulus, then bond yields should definitely be moving higher. They are not. Furthermore, the bullish equity case seems to be predicated on improving growth and increased corporate earnings to support higher share prices. The major US equity indices are still lower on the year. Is this just all part of the usual noise in markets, or is there something unexpected happening?(to be balanced, we note that European equities are higher year to date, although emerging markets continue lower).

We have all seen the first chart before. It overlays the S&P 500 with the size of the Fed’s balance sheet. As the Fed expands its balance sheet by buying bonds, the S&P 500 has risen. The S&P 500 also rose during Operation Twist  when the balance sheet was steady but the process of swapping near zero yield bonds for longer term Treasuries was a de facto form of QE. The only two times in recent years when the Fed was NOT undertaking extraordinary measures, namely the summer of 2011 and the summer of 2010, the S&P suffered its worst two declines since the recovery began in early 2009.

We really don’t think that the following argument is in any doubt. So long as the Fed is printing money and the US economy is expanding, investors place their full faith in the Fed’s ability and desire to generate higher equity prices. The trick for the Fed was always going to be to convince investors that, when the economy was strong enough, they can end QE with no adverse financial or economic events. This is where we are now. The Fed is now on a path to ending QE because of worries about its efficacy and equity markets have made no progress so far in January. Furthermore, January is historically a strong month for equity returns meaning the lack of performance in this period does warrant some attention. 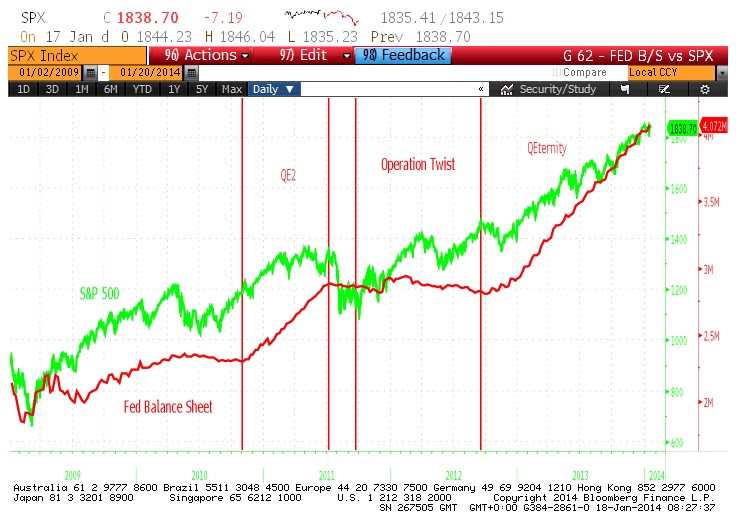 Moving on to bonds. The bearishness surrounding bonds by year end was almost universal. What we think is underappreciated by many is the fact that bond yields have risen when the Fed has printed money and vice versa. There are many reasons for rising yields when the Fed is buying bonds and falling yields when they aren’t. For example, in the Summer of 2010 and 2011, the European crisis was impacting markets and in 2011 the US Government debt ceiling also caused a shift into safe haven assets and away from equities. We also believe that the QE 2 and QEternity periods can be characterised as investors shifting away from bonds (and therefore yields rising), despite Fed buying, because investors were happy to buy into the narrative that risk assets would outperform and that Fed policies would ultimately result in a sustained economic recovery. 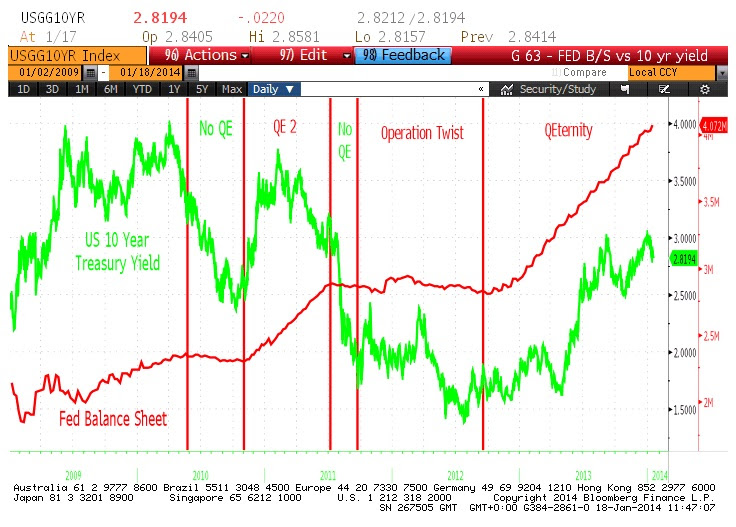 So, the big question for asset allocators is whether equities and bond yields decline as the Fed stops printing money, just as they have done the prior two times in recent years. The bullish case is that the Fed has achieved its goal of generating a self sustaining economic momentum and can end QE with no negative side effects. Simply put, there are far too many people who believe in the Fed’s omnipotence when frankly they really don’t know whether their grand experiment has worked, whether they can exit gracefully or indeed what the long term unintended consequences will be.

We have long been sceptical about the Central Bank’s ability to exit gracefully and confidently, something confirmed in a speech by the Governor of the New York Fed on the 4th January and we suspect that the market will ultimately decide rather than the models and papers prepared by the academics on the committe:

There is an investment world beyond the US and the Fed. China has stated that they no longer wish to increase their FX reserves, which effectively was another form of monetary easing. This monetary tightening together with financial liberalisation and a drive to control the shadow banking system (which will result in higher interest rates and may be a messy process involving bad debt write offs) could well mean that China represents the biggest risk to financial markets this year.

We also worry about whether the European elections in May will result in the rise of anti EU parties which may ultimately threaten the EU project. Martin Wolf wrote an excellent article in this week’s FT titled “Failing Elites Threaten Our Future”. In the article, the simple question is asked whether the masses are really benefitting from the policies delivered by the elites, and whether the EU Project ultimately gets derailed at the ballot box as voters reject the policies promised by the elites who seem to have benefitted disproportionately.

Our belief remains that financial markets are priced for perfection and 2014 is extremely unlikely to be like 2013. Some of the issues noted above, together with the demographic headwinds we have noted before, are risks that are significantly underappreciated by investors. The next few quarters are crucial to understanding how markets will react to the withdrawal of QE. We expect much more volatility in financial markets but we wonder whether volatility is an issue for the second quarter or even the latter part of the year, or whether we see an imminent rise. Nobody can know with any great deal of certainty, however, we do believe that investors should be planning for more volatile markets right now simply because it could be too late if they wait for more information to be available.