The following graphic is taken from “Deal Drivers EMEA” published by Remark, a division of mergermarket.

Mergermarket’s H1 2014 Heat Chart, which tracks ‘companies for sale’ stories, shows that there are likely to be strong appetites for dealmaking over the coming months. Activity is spread throughout a range of sectors and countries, indicating that the gradual recovery of M&A is set to continue in the mid-term. 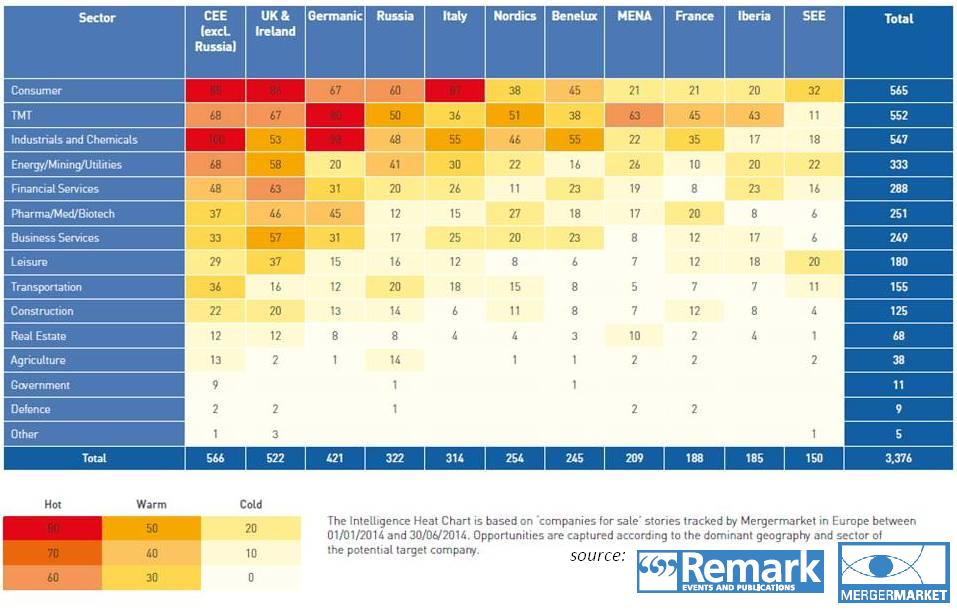 Note: Mergermarket’s Heat Chart of predicted deal flow is based on the intelligence collected in our database relating to companies rumoured to be up for sale, or officially up for sale in the EMEA region. It is therefore indicative of areas that are likely to be active in the months to come. The intelligence comes from a range of sources, including press reports, company statements and our own team of journalists gathering proprietary intelligence from M&A practitioners across the region. The data does not differentiate between small and large transactions, nor between deals that could happen in the short or long term.

As in recent editions of Deal Drivers, the busiest region is tipped to be Central and Eastern Europe (CEE), excluding Russia. The bulk of these for sale announcements are in the region’s larger, fast-growing economies, particularly Poland and the Czech Republic. The region may take a slight hit, however, as Ukraine typically sees a sizeable amount of M&A activity. As tensions rise between Ukraine and Russia, the region overall may see M&A figures constrained.

The UK and Ireland rank second in terms of deal heat. Both countries are seeing strong economic recoveries, with the UK in particular set to return to pre-crisis GDP growth levels by the end of 2014. Ireland has proven increasingly attractive for foreign investors, with the biggest European deal of 2014 thus far – Medtronic’s €33.9bn purchase of Covidien – involving an Irish target and a US-based bidder.

The whole 54 page report can be downloaded via this link.