HOME
Contact Us | About Us
You are here: Home » Lead Article » Emerging Market Hedge Fund Demand – The Six Month Rule in Action

The “2017 Credit Suisse Global Survey of Hedge Fund Investor Appetite and Activity” contains the latest example of the six-month rule in action. Regular readers will know the rule and it’s workings (given below). If you haven’t heard of the rule and you have to do some marketing of hedge funds you will know the rule’s impacts and the psychology behind it. Baldly, investor demand by strategy (and to a much lesser extent by manager anytime) as reflected in surveys is mostly a function of the returns by strategy over the previous six to nine months.

HF Insight recently noted the shrinkage of hedge fund assets devoted to emerging markets (see this article  –
Disappearing World – EM Mandates in the Hedge Fund Industry) over the medium to long term. To reverse that trend emerging market managers really needed some out-performance, and in 2016 Latin American funds produced that.

The consequence was a big shift in expressed interest in the latest survey of investors as shown in the graphic below. 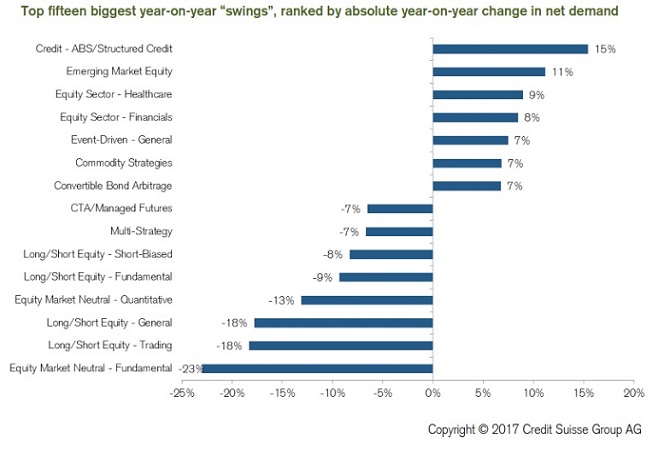 Investor net demand (percentage increasing allocation minus percentage decreasing) for the emerging market equity strategy in the CS Survey went from 7% in the 2016 Survey to 18% in this year’s Survey. As one would expect…

It has been observed that positive flows to hedge fund strategies follow a period of around six months of positive returns.  The lag is accounted for by two major factors – one psychological and one practical.

When investors see monthly hedge fund returns roll in they then build the latest data points into their individual map of returns by manager and strategy. “Oh, another good month for Greek God Capital,” they think, or “Yes, I was expecting another positive month for distressed in February.” We look for patterns and are very capable of seeing them when they are in weak form or don’t exist at all.  Psychologically it becomes very difficult not to expect another positive result after a string of positive results, even when we know that, say, only 8 months out of 12 will be positive in a decent hedge fund return series.  There is therefore an  increasing comfort for  investors as a momentum in returns becomes clear – but that takes a multi-month period, about four to five months empirically.

Investment decision making of even the most active of investors in hedge funds takes place monthly, and much more often the decisions made are after several rounds of analysis and consideration.  That is 2 to 3 monthly investment committee meetings will take place before a possible shift by manager or strategy goes from decision-under-consideration to sending instructions to administrators.  These ways of operating will apply to funds of funds and private wealth managers to a degree.

The final minor factor after psychology, and the cycle of decision making by investment committees, is the terms of dealing in hedge funds. As you know hedge fund subscriptions and redemptions are a hosepipe on the way in and a seasonally-controlled sluice gate on the way out. There are structural reasons why redemptions happen more slowly than subscriptions – gates, quarterly redemptions, queues, annual dealing days, avoiding redemption fees, side pockets and illiquidity of the underlying securities. There are no such structural reasons for delays in putting money into hedge funds. But whilst every effort is made by fund administrators to get subscriptions into hedge funds on a timely basis, sometimes form-filling and verification and bank transfers don’t go smoothly first time. So there are sometimes delays in turning an allocation decision into a subscription. But administrative delays in putting capital to work in hedge funds is the least significant factor mentioned.

The generalised perception of the return stream of a manager or hedge fund strategy has to change first before other factors in the lag come into play. Then investment committees have to have a chance to consider the changes observed in the hedge fund universe and among the managers on their watchlist. Then the committee must take a decision. There probably wont be any administrative delays of any significance in implementing the decision fund once the decision has been made.

In summary there are good reasons why there is a six-month lag between  hedge fund returns at the strategy level and flows to the strategy.  The collateral evidence is in the responses to surveys of investors in hedge funds. The ranking of appeal of hedge fund investment strategies  in surveys is 15% a function of long-term returns and 85% a function of returns in the last six months.