HOME
Contact Us | About Us
You are here: Home » HF Managers » Davidson Kempner Secures THE DEAL in European NPLs

Davidson Kempner will acquire 51% of the Mezzanine and Junior securitization notes within the Galaxy portfolio at an aggregate valuation for 100% of those notes of 40 million euros. Total proceeds for Alpha Bank, including the senior notes and the sale price of the mezzanine and junior notes, correspond to about 35% of the portfolio’s total gross book value. Alpha Bank will retain 5% of the Mezzanine and Junior securitization notes, to comply with risk retention rules, and intends to distribute 44% of the remaining notes to shareholders, subject to regulatory and corporate approvals. 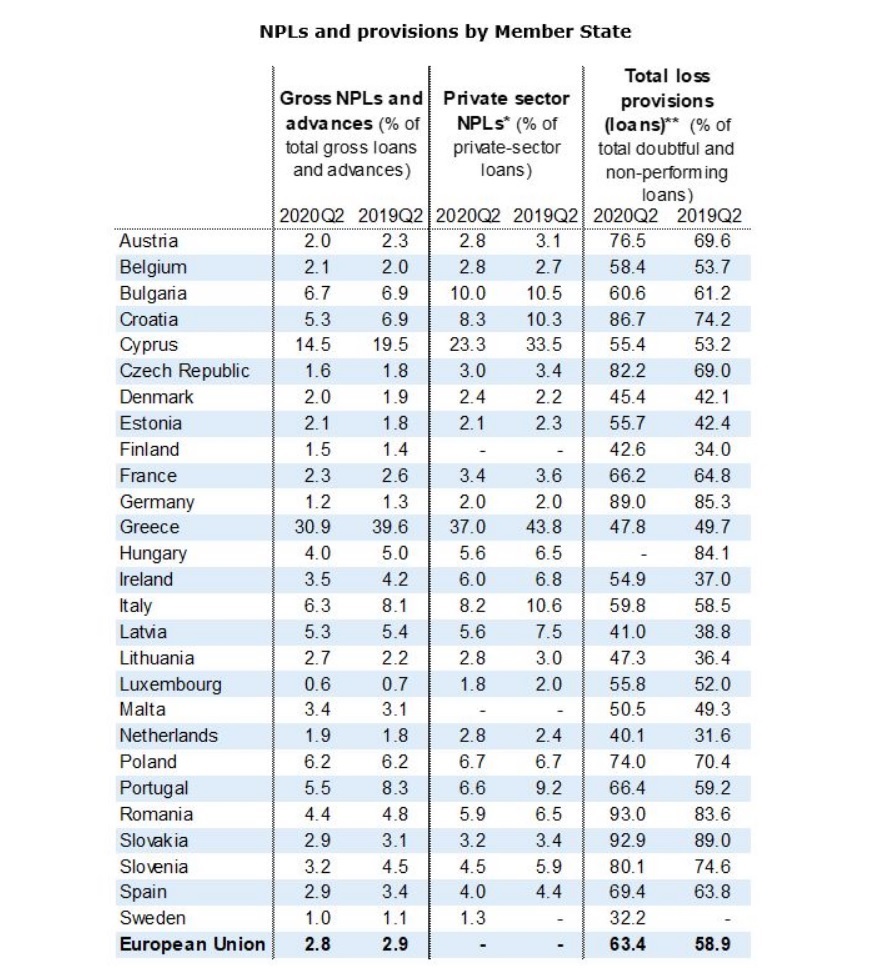 Upon completion, the Transaction will substantially improve Alpha Bank’s balance sheet, bringing the NPE and NPL ratios in Greece down to 24% and 13% respectively, a decrease from 43% and 29% in September 2020. The effect of Project Galaxy on Alpha Bank’s Capital Adequacy Ratio, falls within the Bank’s budgeted capital envelope, at c.280 bps.

As can be seen from the Table from the ECB, the Greek banks are a substantial outlier in terms of non-performing assets in Europe.  For securitization of Non-Performing Exposures/Loans there are few countries in which the likes of Cerberus and Davidson Kempner can do deals of a size that are worth completing. After Greece perhaps only Italy and Poland represent opportunities large enough for the top tier of buyers of distressed assets to work on. Davidson Kempner has bagged one of the few elephant-deals left in the European market.

For the Galaxy Transaction there is an important kicker that Davidson Kempner has done well to negotiate. An entity managed and advised by Davidson Kempner will acquire 80% of New CEPAL’s share capital, with Alpha Bank retaining the remaining 20%. Alpha Bank will enter into an exclusive long-term servicing agreement (“SLA”) with New CEPAL for the management of its existing Retail and Wholesale NPEs  in Greece of Euro 8.9 billion, as well as any future flows of similar assets and early collections. The term of the SLA will be 13 years, with a right to extend. New CEPAL will also manage the Euro 10.8 billion exposures under the Galaxy Securitizations, and Euro 4.62 billion portfolios of third-party investors.

The agreement values 100% of the Enterprise Value of New CEPAL at Euro 267 million (the “Consideration”), with Alpha Bank having further upside through an earn-out of up to Euro 68 million linked to the achievement of certain targets. The Bank, acting as an arranger of a financing syndicate, has agreed with Davidson Kemper the key terms of a long-term funding facility of up to Euro 120 million, which may be drawn at the sole discretion of Davidson Kempner.

Through this transaction it is conceivable that the new American owner of CEPAL could use it to execute a roll-up strategy in Greece amongst collections operations (and to a much lesser extent elsewhere). When Greek banks do go back to extending new loans, Davidson Kempner will benefit through the collections service. In addition there is a tactical advantage for an investor in distressed assets to see the changes in payments by sector and region from the bottom up.

It is perfectly foreseeable that the Galaxy Project will give momentum to the process of turning Greek NPLs into securities. It establishes a legal and commercial precedent that will make it easier for other potential buyers of Greek NPLs to get into the market. The deal establishes a transaction price, as opposed to an accounting or book price for Greek loans. There is always an argument made by banks about the specific qualities of their own loan portfolios, but the Galaxy Project is a very good (and relatively large) start.

Davidson Kempner became preferred bidder for the Galaxy Project in November last year. It is now the front-runner in securitized NPLs from Greece. In combination with the astute New CEPAL deal this gives Davidson Kempner a privileged seat in this market. #Smart #Insight #RegularReturns #Uplift