HOME
Contact Us | About Us
You are here: Home » Investors » Cliffwater Hedge Fund Commentary – April 2014

April was a moderately positive month

for most hedge fund strategies and all strategies outside of Global Macro remain in the black for the year. In April, the HFRI Fund Weighted Composite Index lost 0.2% and the HFRI Fund of Funds Composite Index detracted 1.1%. As discussed in the Equity Long/Short section below, managers faced similar headwinds to March as value sectors and stocks outperformed growth/momentum sectors. Interestingly, though, despite significant turmoil in certain sectors, the HFRI Equity Long/Short Index only lost 0.7% for the month. Arbitrage/Relative Value and Multi-Strategy funds again provided strong diversification benefits by gaining 0.7% and 0.4%, respectively. Event Driven and Global Macro/CTA each were marginally positive at 0.1% for the month.

Equity Long/Short
Following a similar pattern to March, while markets across the world posted small gains, there was
continued rotation underneath the surface. Long positions that posted gains earlier in the year
underperformed broader markets, value sectors and stocks outperformed growth/momentum sectors and stocks, and European markets notably outperformed US markets. In terms of sectors, not surprisingly high growth areas of the market including Internet, Social Media, and Biotech continued to see many stocks post double digit declines. Value oriented sectors that outperformed included Energy, Consumer Staples, and Industrials.

Managers have finally begun to cut risk and decrease exposures in response to negative alpha generation and portfolio losses, and also due to overall risk reduction before the weak seasonal trends during the summer months. In addition, several managers used the severe market rotation to concentrate their portfolios in the highest conviction positions. 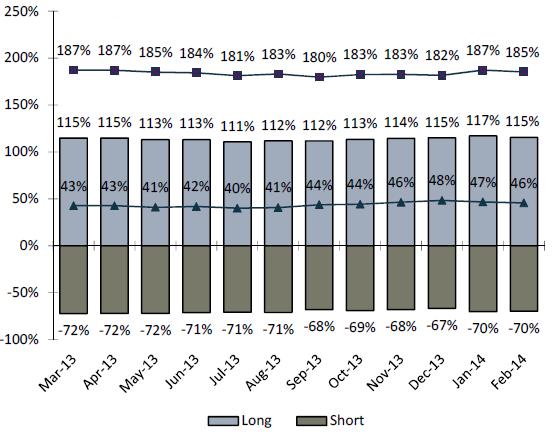 Event Driven
The HFRI Event Driven Index was up 0.1% in April, while the S&P 500 ended the month up +0.7%.
Cliffwater’s Select List event funds generated varied performance with the diversified event driven funds’ performance ranging between -1.8% to +1.8% with an average of -0.1%. Cliffwater’s Select List of activist funds also generated diverse performance with an average return of +0.1%, ranging from -2.9% to +7.3%. Although the equity markets ended the month up, it was a month dominated by the
continued unwind of momentum and growth. A number of widely held event driven names were hurt by position unwinds. The volatility did appear to provide the opportunity for managers to build and/or
add new positions. In general, credit performed better than equity and many managers benefited from the distributions from Lehman Brothers Holdco and Lehman Brothers International Europe paid
during the month. Additionally, a number of managers were positioned for the Chapter 11 bankruptcy filing of Energy Future Holdings Corp. (formerly TXU Corp.) at the end of the month to rework debt that became unsustainable amid hefty losses. Structured credit was again a positive sub-strategy. As shown on the exposure chart, the net exposure for event driven funds on Cliffwater’s Select list is currently slightly below its average over the past 12-months at 61%.

Credit/Distressed
In many respects, April was a repeat of March – high yield bonds and loans produced modest gains of
0.7% and 0.2% despite equity market volatility, and credit hedge funds largely performed in a tight range between flat and up 1%. Loans are underperforming bonds for the year with lower Treasury yields driving much of the performance in high yield bonds. The HFRI ED: Distressed/Restructuring Index gained 0.3%, compared with 0.5% in March, for a year-to-date gain of 3.1%. Underlying these similarities however were some notable developments in the high yield markets – during the month, the market experienced the largest ever single high yield issuance, the largest high yield default, and the first retail outflows for loan funds since June 2012. The bankruptcy filing by TXU at the end of the month is good news for most creditors, for whom the filing represented the culmination of months of
negotiations among various parties toward a plan which could see TXU exiting from bankruptcy in less than a year under new ownership. Loan funds reported two consecutive weeks of outflows in April, breaking a trend of 95 consecutive weeks of inflows. High yield bond funds had positive flows for the month. 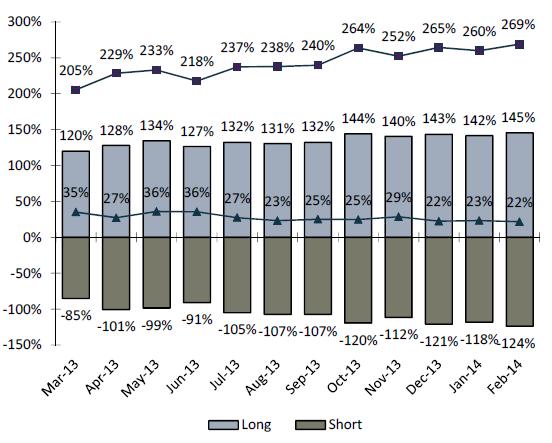 Market Neutral
The HFRI Relative Value Index was up +0.7% in April 2014. While some fixed income arbitrage managers were forced to reduce risk in light of the rapid rise in intermediate-term yields in March, classic relative value trades such as bond-futures basis trades were profitable this month. Japanese banks and pension funds also continued to adjust capital allocations, which created pricing dislocations in that country’s government bond market. Convertible arbitrage managers generated modest profits in April, with a +0.1% return for the HFRI RV:Fixed Income-Convertible Arbitrage Index. The convertible bond issuer community tends to be dominated by growth companies, many of which had underlying equities that continued to sell off in April. However, convertible valuations for these companies continued to hold up well during the month, which demonstrates the strong and persistent demand from outright investors. Nevertheless, convertible arbitrage managers were growing increasingly concerned about overstretched equity valuations and firmed up delta hedges in order to protect against any future weakness in the convertible bonds. Managers with a long volatility bias generated modest gains as certain sectors experienced materially higher levels of implied volatility for single name equity options. However, the VIX Index overall, which is a proxy for one-month volatility on the S&P 500 overall, drifted down from 13.9 to 13.4.

Global Macro
Market conditions were choppy once again in April as a result of rising tensions between the Ukraine and Russia, in addition to concerns over US equity market valuations. Discretionary managers had highly dispersed performance, ranging from down 5% to up 1%. Systematic managers fared better, with most putting up modest gains for the month.

Equities experienced a significant drop going into mid-month, as the situation in the Ukraine deteriorated and market participants expressed concern over valuations. Although most equity markets recovered in the second half of the market, the price action was not favorable to the positioning of most discretionary and systematic managers. In fixed income markets, bonds rallied on speculation that the ECB might be forced into easing and on safe haven flows in reaction to the Ukraine crisis. Long exposure to fixed income was one of the most profitable contributors to performance for systematic managers, but many discretionary managers were negatively impact from short exposure to Treasuries. In currency markets, consensus long exposure to GBP was profitable on the back of strong data releases. However, a sharp appreciation in the yen at the beginning of the month negatively impacted manager managers. Commodity markets offered a number of strong opportunities, which many managers were able to capture profitably. Long exposure to nickel proved especially profitable as Indonesia, one of the world’s largest nickel producers, banned exports. Natural gas also resumed its upward trend as cold weather in the US continued into the spring. However, some managers were negatively impacted by crude oil positions as a rally in the first half of the month was reversed sharply when data shows that US supplies reached their highest level since the 1930’s.