HOME
Contact Us | About Us
You are here: Home » Investors » Acceleration in Downtrend for Funds of Hedge Funds

Eurekahedge has just published its annual review of funds of hedge funds. It is difficult to find any good news in it.

The divergence of the paths since the Credit Crunch of the single manager and multi-manager hedge fund businesses is well known, and is reflected in the time series of aggregate AUMs for the two sectors, shown below. 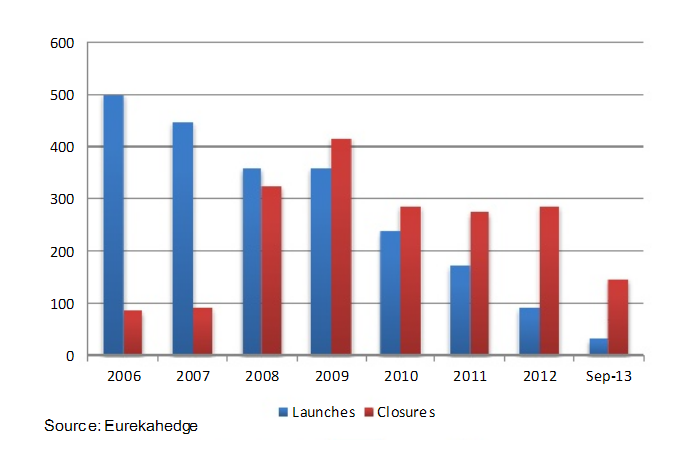 The table below shows the performance at the index level of funds of funds versus single manager hedge funds.  Since most flows into the hedge fund industry for some years have come from investing institutions emphasis  should be put on the medium term measures of relative performance.

It is fair to say that investing institutions see the performance gaps in the table to be too big to justify two layers of fees.  In a reversal of the position for single manager hedge funds, a more constructive case can be made for larger funds of funds versus smaller ones, as shown in the table below.

The commercial pressure on funds of hedge funds has brought a number of responses including, the offering of advisory services, bespoke solutions, segregated products, and changes to the terms of business.  Before single managers went through the same experience, for a long time (over ten years) fund of hedge funds had the advertised fee structures and lower fees which were actually charged. The advertised rates appeared on databases and presentations and marketing documents.  The actual rates were discounted for size through negotiation, often with non-disclosure clauses.  So it has been difficult to establish what the average fees paid by investors into funds of hedge funds has really been. However Eurekahedge have come up with a way to show the trend, if not the exact fee level in any one year. The table below shows the average fee structure of funds of hedge funds launched each year since 2005.

Another area that changed from the pre-2008 to post-2008 era is in fund of hedge funds liquidity. Many investors in hedge funds found their experience in seeking redemptions in 2008/9 unacceptable. Ever since there has been pressure on single manager hedge funds to increase the frequency of dealing, and reduce the notice periods to deal. The accommodations of the single managers have allowed multi-manager hedge funds to offer better terms too. This reflected in the table of average redemption period for funds of funds shown below.

Pre-Credit Crunch the average notice period for redeeming from a fund of hedge funds was approaching two months.  Now the average notice period is just over a single month. According to Eurekahedge as at September 2013, 55.6% of funds of hedge funds have a redemption notification period of less than 30 days while in 2006 this percentage stood at 22.9%.

The consequences of these commercial pressures on funds of hedge funds is amalgamation of firms and funds, as the long term trend of shrinking industry assets continues.